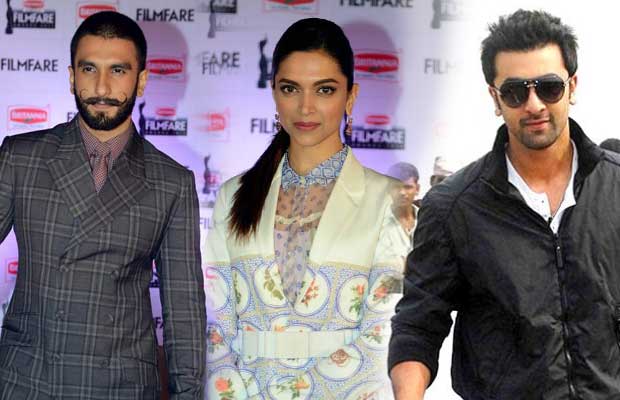 [tps_footer]Bollywood actress Deepika Padukone recently opened up about her equation with costars Ranveer Singh and Ranbir Kapoor. To which the actress states that she is very adaptable and is comfortable working with both the actors. After her film ‘Tamasha’ did well, Deepika is looking forward to the release of ‘Bajirao Mastani’ with Ranveer Singh and is currently busy promoting. The actress further talked about interesting facts of Ranveer and Ranbir and their different styles of promotion.

Deepika Padukone revealed that many people had warned her, doing back to back promotions of films releasing in a span of one month will be too exhausting for the actress. But the actress states that during the promotion of ‘Tamasha’, she had to do all the talking as Ranbir Kapoor does not open up that easily, so she had to make up for his share. But during ‘Bajirao Mastani’ it is the complete opposite as Ranveer Singh always makes up for the both of them as he begins with his own tone of promotion, due to which Deepika Padukone is spared from doing all the talking!

The actress further revealed that she is very comfortable with both Ranbir Kapoor and Ranveer Singh and that all of it depends on the situation. After winning the audience with her charming aura in the film ‘Tamasha’, Deepika Padukone is all set to dazzle on screen once again as Mastani in the film ‘Bajirao Mastani’ helmed by Sanjay Leela Bhansali. Her beautiful avatar in the film’s trailers and songs have already won everyone’s heart and now the audience will get to witness the magic of Deepika and Ranveer’s jodi on December 18, 2015.