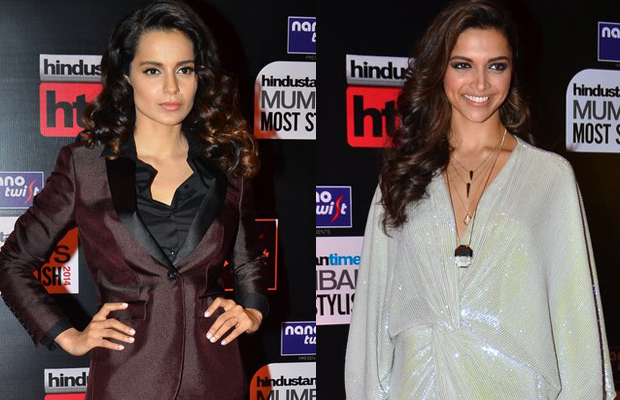 It is not a hidden fact that friendship between Deepika Padukone and Kanagana Ranaut has been on and off sometimes. But nowadays, it looks like Kangana is on a spree of throwing shade at her fellow industry stars, and her recent take was on Deepika padukone. The ‘Queen’ actress has been known for speaking her mind openly and has time and again taken few digs at Deepika. When asked about the same, all Deepika has to say is absolutely nothing!

During her recent launch of clothing line ‘All About You’, Deepika Padukone was asked to comment about the recent things Kangana has been saying about her. To which she responded by saying that she hasn’t said anything before and she will not say anything now. Seems quite cold doesn’t it? All the problems seemed to begin when Deepika dedicated her award to Kangana Ranaut which created some misunderstandings between them.

Although all was clear after a while, during her ‘Katti Batti’ promotions Kangana had apparently said that her equation with Deepika is ‘katti batti’ which means their friendship is on and off. And right now it seems to be off for sure! Kangana Ranaut was apparently miffed at the time she personally invited Deepika Padukone to her film’s screening, but the actress did not show up. Seems like all these small things have piled up and created a sense of rivalry among the two stars.

While Deepika has usually been quite open to media about the misconceptions and rumours that go around, he silence on this matter about Kangana is ringing alarms about their rivalry. Are the two actresses blowing things out of proportion? Share your views with us.

Also Watch: Deepika Padukone Opens Up On Her Misunderstandings With Kangana Ranaut