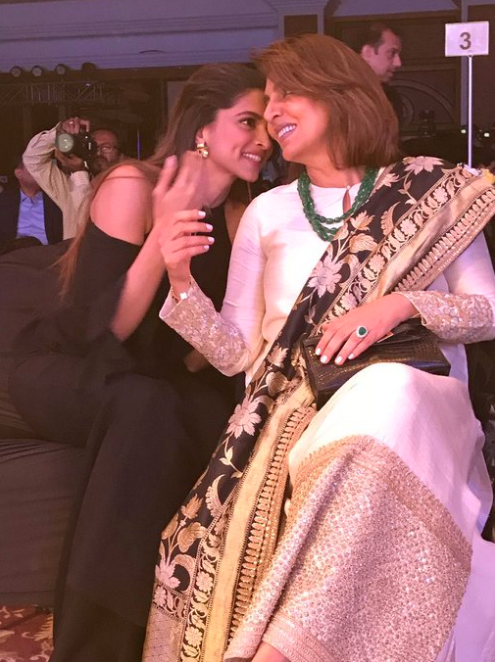 Deepika Padukone was found having a friendly chat with her ex-boyfriend Ranbir Kapoor’s mother, Neetu Kapoor.

The actress was recently spotted giggling with her ex-boyfriend Ranbir Kapoor’s mother, Neetu Kapoor. The two of them were seen getting along really well. There was a smile of joy visible on their faces as Deepika was trying to tell the other lady about something.

Ranbir, even after his break-up with the ‘Tamasha’ actress, has been very comfortable with her. They have done films together even after their break-up and they continue to be good friends. Now this picture of Deepika with his mother has left us all wondering if they are discussing about his life!

What do you think? Tell us in comments section below.

There were rumours going around that Neetu and Deepika do not share a healthy relationship. That was back in the days when Neetu’s son, Ranbir Kapoor was dating the actress. There were also some speculations about Neetu being responsible for their break-up. But now with the revelation of this picture, all those rumours have come to an end.

Ranbir and Deepika are one of the most loved on-screen couple of Bollywood. Their chemistry in films like Yeh Jawaani Hai Deewani and Tamasha is adorable. In fact, Neetu was the one saying it herself that she loved their chemistry in Tamasha. And now with this picture of them going viral on internet, we can believe that the two of them share a different equation now.

Deepika, who was last seen in Bollywood in Sanjay Leela Bhansali’s Bajirao Mastani, is presently working on Padmavati which is expected to release in Diwali, this year.