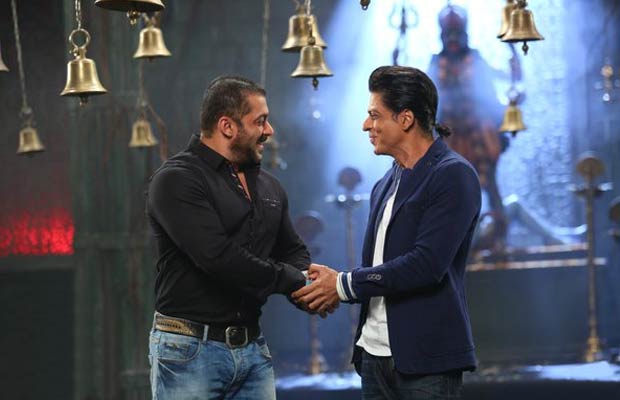 [tps_footer]As earlier we reported, Bollywood stars Shah Rukh Khan and Salman Khan who had come together for Bigg Boss 9, had fallen into a criminal offence for allegedly wearing shoes inside the temple in the promo video of Bigg Boss 9.

The Delhi police told a court on Friday, that the stars had no intentions to hurt religious sentiments. Giving a clean chit to the stars, the police told court that they had no intention to hurt religious sentiments as they were shooting in a makeshift temple, which was a part of the set organized in the studio. According to the facts and report made by the complainant, no cognizable offence is made out.

The report was filed in the court of Additional Chief Metropolitan Magistrate V.K. Gautam against the actors, after a complaint was filed by advocate Gaurav Gulati. He told the court that he noticed on a YouTube post dated December 15, 2015 that the actors wore shoes on the sets of a Kali temple while shooting for a reality TV show.  Not only against Salman Khan and Shah Rukh Khan, the case was also filed against the producer and director of the reality show for showing the same.

The complaint had sought the court’s direction to the police to register an FIR against the two actors, Colors channel and director and producer of reality show ‘Bigg Boss 9‘ for alleged offences under sections 295A (deliberate and malicious acts intended to outrage religious feelings), 298 (uttering words with deliberate intent to wound religious feelings) and 34 (common intention) of the IPC.

It is reported that the same case was filed in a Meerut court, which has already dismissed it.[/tps_footer]