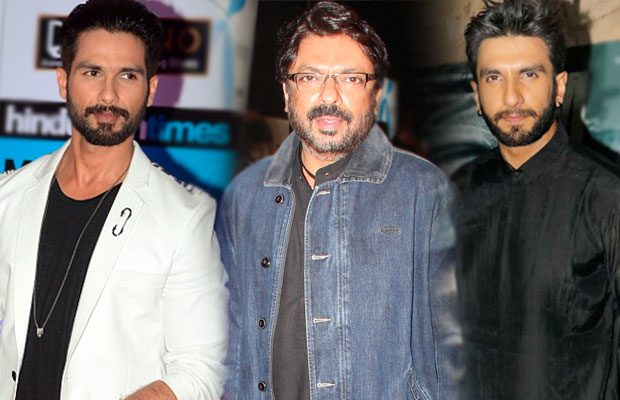 Sanjay Leela Bhansali’s highly anticipated film Padmavati is yet to go on floors and the film is grabbing all the limelight over the casting. Sanjay Leela Bhansali‘s next mammoth project ‘Padmavati‘ starring Deepika Padukone, Ranveer Singh and Shahid Kapoor in the lead roles has been in the news since it was announced first. Well, getting two leading actors for the same project is quite tricky and not so easy.

Reportedly, Shahid plays a strong part while Ranveer asked for the script narration after knowing about the second lead hero of the film. Also, as Ranveer Singh will be having a negative role, he preferred to know about the script and the insecurity started from there.

Apparently, director Bhansali decided to call all the 3 leading stars of the film and conducted a joint narration. While the official confirmation regarding the film and the casting is awaited, reports are doing rounds that Sanjay Leela Bhansali has got himself trapped between the egos of the two leading actors- Shahid Kapoor and Ranveer Singh. In fact, Shahid Kapoor reportedly threatened to move out of the project.

Reports suggest that Ranveer Singh demanded from the director to not include Shahid in the inaugural posters of Padmavati. Knowing this and getting worried about his high-budget film, SLB called an immediate meeting and tried to solve the problem between the three leading actors. After much of discussions and commitments from SLB, the three agreed and the issues were solved at once.

Talking about the film, Padmavati is highly anticipated film and is grabbing all the limelight since its inception. Directed by Sanjay Leela Bhansali, is said to be a historical drama based on the obsession of Alauddin Khilji over Rani Padmavati. The film will go on floors this year!