The King Khan of the tinsel town Shah Rukh Khan is all spontaneous. The superstar who is always on the go with his back to back shoots is currently busy with his film ‘Fan’. The glimpse of the film is already out and is entertaining to the core. The masses can hardly wait for the film to hit the silver screens.

SRK who likes to be all realistic in his films is once again ready to flaunt his versatility. The film ‘Fan’ is a story of a super star and his biggest fan. The audience will be treated with a double dose of Shah Rukh Khan. SRK will himself act in the role of a superstar and will also don the character of his biggest fan.

Seems like, Shah Rukh Khan who hails from Delhi is all nostalgic about the capital. The actor who has lived his growing years in Delhi is all smitten by the city. SRK is currently shooting in Delhi for his upcoming film ‘Fan’ and the place reminds him of his parents all the more. All emotional and sentimental SRK took to the micro blogging site Twitter and posted a picture of Red Fort in Delhi and captioned it, “In hometown Delhi. Red Fort …cool evening…dancing on the roads like a Fan. Will go & visit parents at nite.” 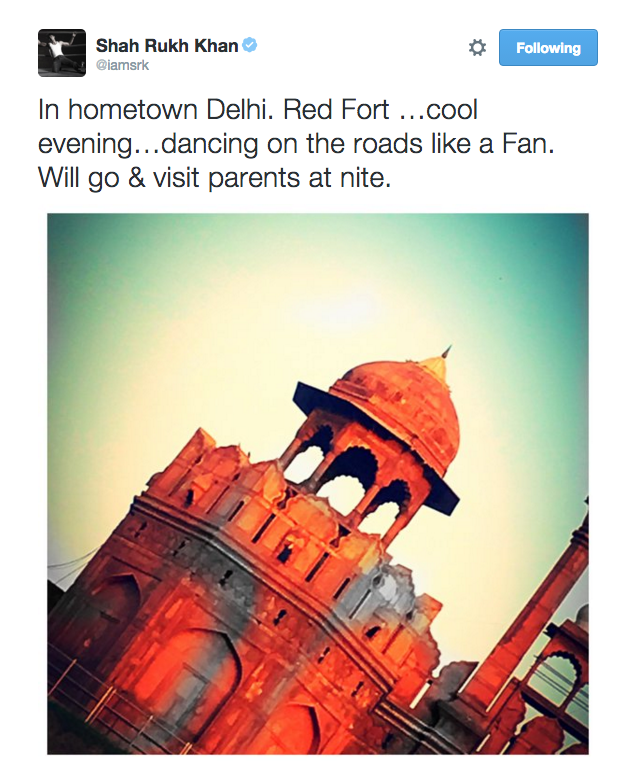 Must say, Shah Rukh still has his childhood memories intact. Shah Rukh starrer film ‘Fan’, is being directed by Maneesh Sharma, the movie is helmed by Yash Raj Films and is all set to hit the screens on April 15th, 2016.

Apart from the film ‘Fan’, the super busy King Khan just unveiled the glimpse of the film ‘Dilwale’. The film  is directed by Rohit Shetty and stars Shah Rukh Khan, Kajol, Varun Dhawan and Kriti Sanon in lead roles.