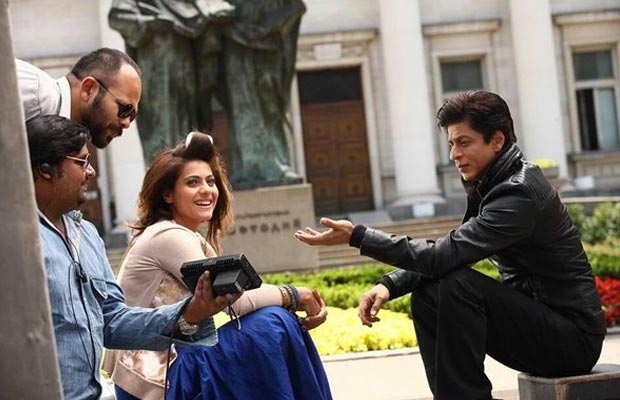 [tps_footer]Bollywood’s highly anticipated movie ‘Dilwale’ starring Shah Rukh Khan, Kajol, Varun Dhawan and Kriti Sanon released yesterday December 18, 2015. Directed by Rohit Shetty, the movie opened up with great response from the audience. The film was much in limelight for its impressive star cast and top notch in its promotional activities too. The stars of the film left no platform unexplored for promoting their entertainment flick. ‘Dilwale’ was high on the minds of the audience for the reunion of the most romantic on screen pair of SRK and Kajol.

Shah Rukh Khan’s production house Red Chillies Entertainment released new behind the scenes video on December 21, 2015. The behind scenes video is from their Bulgaria schedule. The video starts from Rohit Shetty asking Shah Rukh Khan what time he would like to come on set. To this Shah Rukh adds that he will be on time on the set, just add 45 minutes more to the decided time. Kajol seemed to enjoy Bulgaria, the beautiful places and the people in all. One little fan came on the set and asked SRK “Did you really get a second life in Om Shanti Om?” To which SRK jokingly replied “Yes I did”. Witty! Kajol and SRK were adorably goofy together on set. From Kajol commenting on SRK’s dimples to both of them hugging each other, the duo prove why they are most favourite pair of Bollywood.

Check out the video-