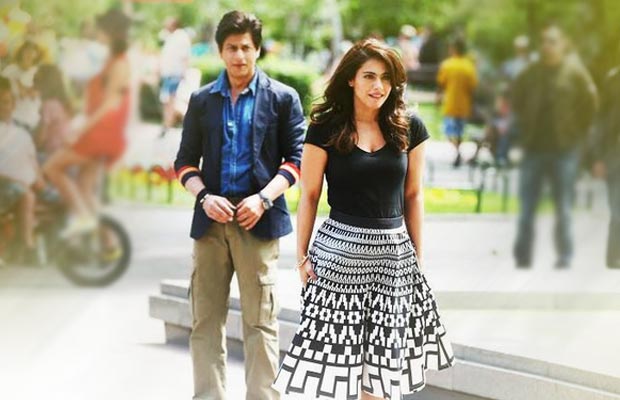 [tps_footer]Shah Rukh Khan is all geared up for his upcoming film ‘Dilwale’. The superstar is leaving no stone unturned to promote the film to its fullest. The Rohit Shetty directorial entertainment flick will see the marvelous cast of SRK, Kajol, Varun Dhawan and Kriti Sanon. After the songs Gerua and Manma Emotion, the audience is waiting with bated breath for the other songs of the film to unveil.

Finally, the glimpse of the song Janam Janam is out and it’s a treat to the eyes. The extremely short clip gives us a hint that the track is going to be fantastic by all means. The film with the most enviable star cast is much in limelight as it will reunite the most romantic on screen pair of Shah Rukh Khan and Kajol. The two highly talented stars will once again flaunt their chemistry on the silver screen after many years.

King Khan, Shah Rukh who is very much active on his social networking accounts, took to the micro blogging site Twitter and tweeted about the upcoming song Janam Janam. The superstar posted a video and captioned it, “For me it’s the theme song of the film. Hope u all like it too.”

The minute glimpse sees Shah Rukh Khan and Kajol in a distant position. The 6 seconds video features Kajol walking swiftly. The tune is the same one which features in the promo of the film.

The first song from the film ‘Dilwale’ to release was Gerua; the romantic track has impressed the masses by all means and is earning applauds from all ends. Coming to the song Manma Emotion, the track is labeled as the foot tapping song featuring Varun Dhawan and Kriti Sanon. Now whether the song Janam Janam proves to be a promising one or no only time will tell.

The much awaited film ‘Dilwale’ is all set to hit the screens on December 18th, 2015.[/tps_footer]