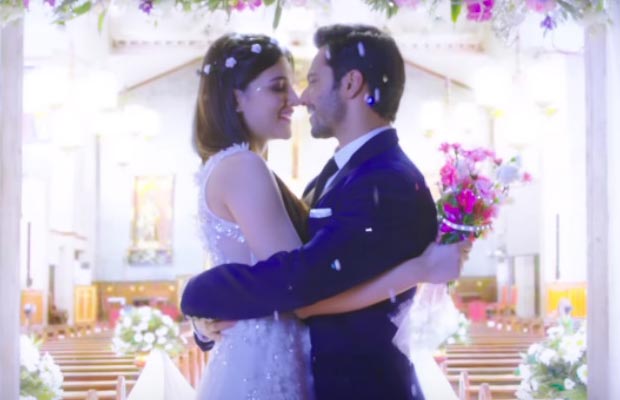 [tps_footer]Rohit Shetty’s ‘Dilwale’ is not yet done with all the surprise elements. The film which has already crossed two weekends with good box office collections is yet again ready with a new song to surprise the audience. Varun Dhawan and Kriti Sanon’s party track ‘Premika’ is all you need this party season. After the peppy numbers Tukur Tukur and Manma Emotion, Varun and Kriti are once again raising their fun chemistry quotient high.

The masses are still tongue tied with the stars Shah Rukh Khan and Kajol in the movie ‘Dilwale’. SRK and Kajol starrer romantic tracks Gerua and Janam Janam have reached the heights of popularity. Giving a tough fight to the highly talented senior stars Varun Dhawan and Kriti Sanon can surely be termed as the cutest on screen duo of the tinsel town.

The track Premika was initially left out but has now released. The fun filled and chemistry filled song initiates with Varun Dhawan’s signature SRK pose. Looking pretty as ever Kriti is seen running into the arms of Varun. Premika is not a typical romantic number but instead can be called as a celebration. The color filled shots with mesmerizing dance moves makes the track a treat to the eyes.

Varun Dhawan and Kriti Sanon are complimenting each other by all means. The song Premika has foot tapping beats with a perfect combo of romantic lyrics which can easily be hummed.

Premika is composed by Pritam and is crooned by Benny Dayal and Kanika Kapoor. Seems like, Varun Dhawan and Kriti Sanon are all set to add the diminishing charm to the film ‘Dilwale’ with this party track. Rohit Shetty directorial film ‘Dilwale’ has earned good collection at the box office; the film is being termed as family entertainer but is witnessing a tough competition from Sanjay Leela Bhansali’s historic drama ‘Bajirao Mastani’.