Disha Patani is not new to being Internet famous. The actress might have done a handful of films but she has a lot of admirers on Internet. Every time Disha Patani shares her dance videos, fans go berserk.

Disha Patani is certainly passing on some serious dance goals to all her fans and followers. Disha seems to be ready with her dancing shoes on, all the time, and we just love it.

Whether you are a Disha Patani fan or not, her social media accounts will surely make you go head over heels. Take for instance her latest dance video which she has shared on her official Instagram page. We are sure you will definitely fall for her moves.

Time and again Disha treats her fans with one of her best skills – dancing. And this time too, this star has come up with a video we cannot stop drooling about. She shared her new dance routine on international sensation Jason Derulo’s latest superhit track ‘Swalla’. From hot hip movements to killer dance skills, Disha’s fans can’t stop watching her move smoothly on the dance floor.

While her fans flooded the comments section with praise and adoration, what we were stunned to see, was a comment from the hip-hop star, Jason Derulo, himself! 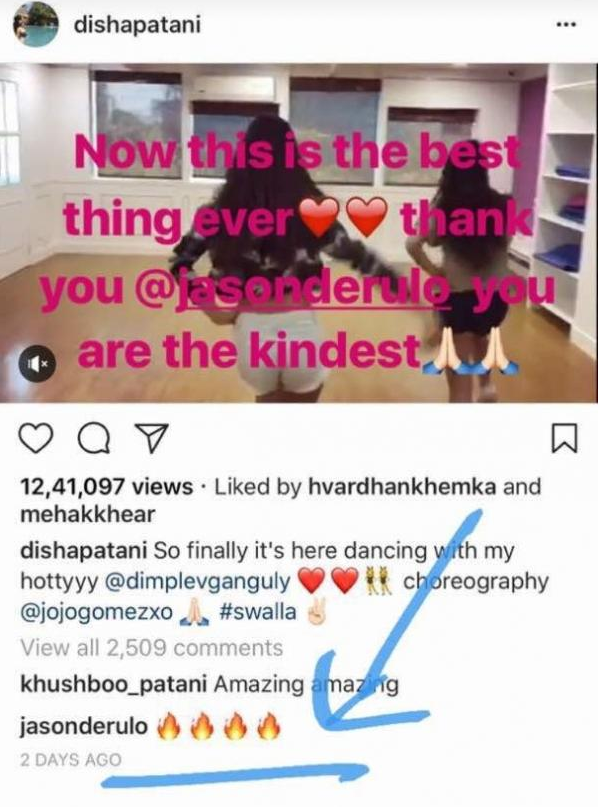 While the international star’s comment made Disha’s day, we’re quite excited over the little sparks that flew between the two over social media.

On the work front, Disha was last seen in Kung Fu Yoga opposite Jackie Chang, Sonu Sood and Amyra Dastur. While there’s no confirmation on her next film, we’re eagerly waiting to see her back on the big screen. Currently, she is going through scripts to sign her next film.