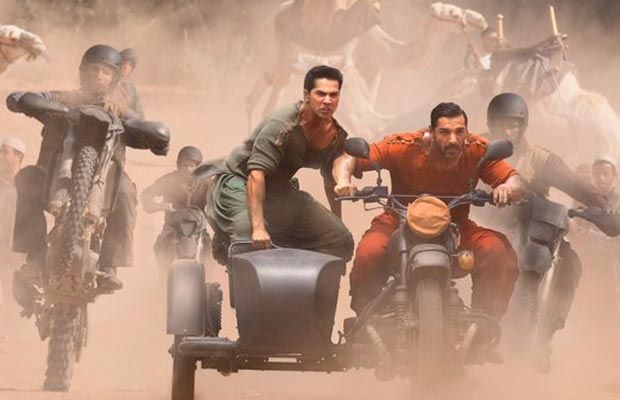 [tps_footer]Varun Dhawan and John Abraham are the two most handsome men in the tinsel town. When two hunks come together the hotness meter is surely going to break its limits. Varun and John will soon be seen in the film ‘Dishoom’. The action oriented film is out with its very first look and the glimpse is marvelous and adventurous by all means. Movie ‘Dishoom’ has been in news since its inception and finally the first look of the film is here with a bang.

Looking all action oriented and tough Varun Dhawan and John Abraham are seen in an edgy mode. The first look sees the two highly talented actors riding a dosti scooter which was also used by yesteryear superstars Amitabh Bachchan and Dharmendra in the film ‘Sholay’. Well, seems like this poster of ‘Dishoom’ resembles new age Jai Veeru combo.

Characters of Varun and John are named as Kabir and Junaid. The Dilwale star Varun took to the micro blogging site twitter and posted the poster saying, “BOOM.introducing Kabir  and Junaid .Get ready to #DISHOOM on July 29th 2016.#dhawanandabraham #buddycops” 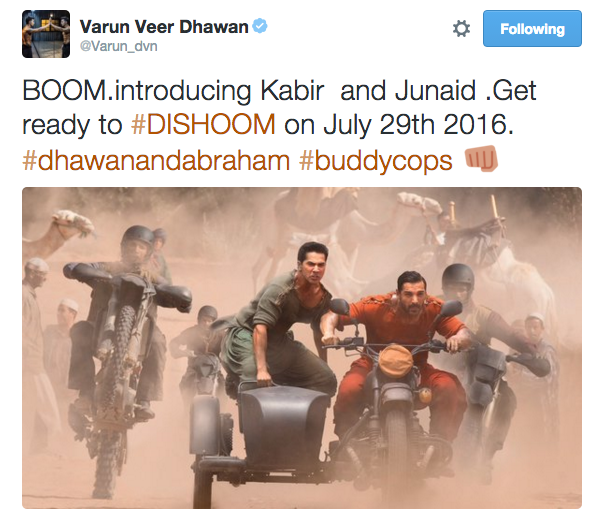 Amidst the dusty backdrop and loads of bikers, the film is surely going to be high on action and guts. The two stars Varun and John are complimenting their bromance to a large extent. The film is said to be based on the theme of a buddy cop where one can expect loads of twists and turns. The action film is shot in mind blowing locations of the Middle East in between the sand dunes and large scale scenes.

‘Dishoom’ is directed by Rohit Dhawan and produced by Sajid Nadiadwala. The much in limelight action film will also feature actress Jacqueline Fernandez. Though Jacqueline is not featured in the glimpse the starlet holds a pivotal role in the movie.