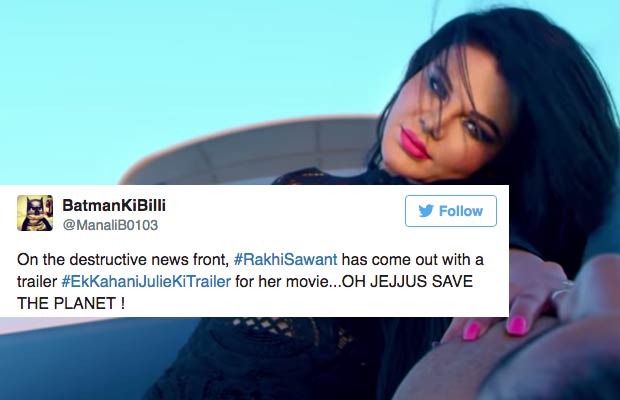 The trailer of Rakhi Sawant starrer upcoming film Ek Kahani Julie Ki is out. Rakhi will be doing a full-fledged role in the film. Directed by Aziz Zee, the film also stars Amit Mehra, Jimmy Sharma, Saniya Pannu, and Avadh Sharma in lead roles. The trailer of this thriller film was out today and people went crazy after watching it. Well, no release date of the film is mentioned in the trailer.

Before the film hits the theatres, have a look at how Twitterati trolled the trailer:

And the award for the 'worst trailer ever' goes to #EkKahaniJulieKiTrailer!
Watch it at your own risk!

On the destructive news front, #RakhiSawant has come out with a trailer #EkKahaniJulieKiTrailer for her movie…OH JEJJUS SAVE THE PLANET !