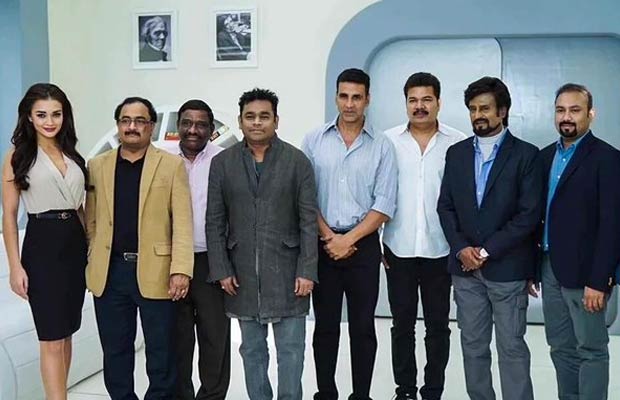 [tps_footer]When we are talking about a Rajnikanth film, anything, and everything is possible. After the fabulous success of first Enthiran movie starring Rajnikanth and Aishwarya Rai Bachchan. A lot more is expected from the new installment of this series, called Enthiran 2.0 and the expectations to have terrific action sequences are even more because on one hand we will have Chitti, a robot character played by Rajnikanth and Akshay Kumar a.k.a Khiladi Kumar, who will play a negative role opposite Rajnikanth and we know the daredevil stunts Akshay can easily perform.

We know how funny Akshay Kumar can be even in action scenes where he can kick really high, throw deadly punches but still surprise all of us with a comic element. And for Rajnikanth, it’s difficult to find words for his way of action. Even the dictionary fails.

But we have successfully brought a big news for all of you, who are waiting for Enthiran 2.0 to release soon and want to know every detail about this costliest movie ever made. It’s difficult to know everything about this highly anticipated movie as the security is pretty active and is always on a high alert. But a leading portal has recently reported,

“The preparations for 2.0 are grand, which is not quite unusual for a Shankar’s film. It has been earlier reported that the crew is planning to shoot a football match sequence. The theme is Indian Football League. And the banners reveal that the match is between Chennai and Delhi team. It is said that Bollywood actors Amitabh Bachchan and his son Abhishek Bachchan might play a cameo in the film since the later are the co-owner of the Chennai’s football team, Chennaiyin FC.”

Even the Oscar winner, sound engineer Rasool Pookutty is a part of this movie along with A. R Rehman, two Oscar winner, who will be the music director for Enthiran 2.0 and Amy Jackson will also feature in this flick. Recently, Resool Pookutty had shared a pic of the making of a grand set for this movie and he said it’s just the beginning. Well, we agree with him. And if the beginning is soo grand then what the whole movie will look like when it releases ??[/tps_footer]