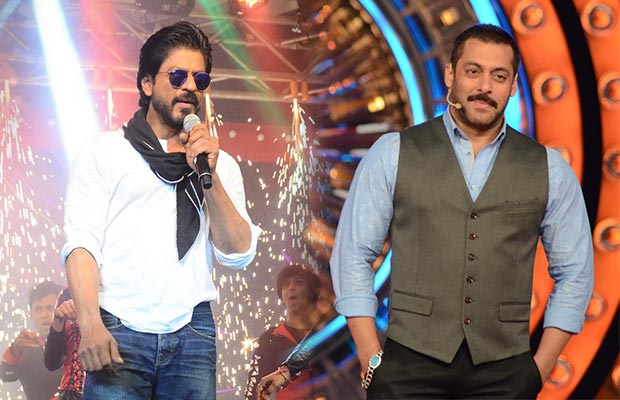 [tps_footer]Bollywood actors Salman Khan and Shah Rukh Khan surely share a good bond with each other now. Shah Rukh Khan will soon gear up for the promotions of his much awaited film Dilwale and interestingly SRK is likely to promote the film on Salman Khan‘s Bigg Boss 9 show.

Both the actors will share the stage together after a very long time and the makers of the show are trying to figure out the perfect date for it. If things work out, Shah Rukh Khan would be appearing for the promotion of his film Dilwale with his entire team on the show.

Well, it would be great to see Salman Khan and Shah Rukh Khan together on Bigg Boss 9 and if this happens, it would be surely one of the most entertaining episodes of Bigg Boss 9. Also Salman Khan had recently done a Dubsmash on SRK’s most popular song from film DDLJ and not only that even SRK did a Dubsmash with Dilwale team on Salman‘s Prem Ratan Dhan Payo title track. Are you all excited to see Karan and Arjun together again?

Talking about film Dilwale, the film stars Kajol, Varun Dhawan and Kriti Sanon along with Shah Rukh Khan. Directed by Rohit Shetty, the film is all set to hit theatres on December 18 this year.