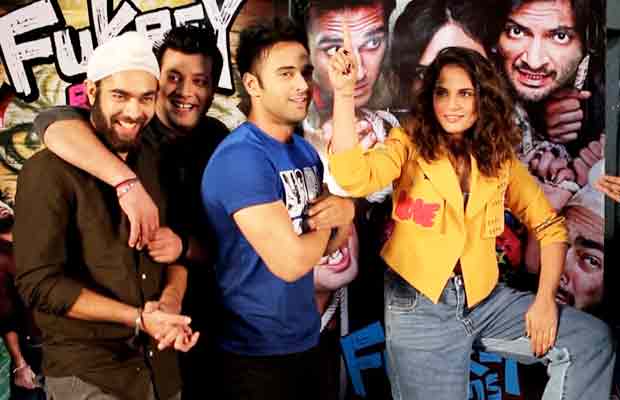 Fukrey Returns cast in an exclusive interview with Business Of Cinema.com!

‘Fukrey Returns’, one of the anticipated, funniest and quirkiest project of the year, has released at the Box Office. 2013 film Fukrey brought laughter riot and true entertainment for the audience in the theatres. Well, the ‘Fukrey’ gang starring Pulkit Samrat, Manjot Singh, Ali Fazal, Varun Sharma, Priya Anand, Richa Chadha, is back. The gang returns with their Bholi Punjaban played by Richa Chadda. This time the boys’ have gone wild, bizarre and sharp.

Being a sequel to the 2013 sleeper hit Fukrey, the audience, as well as critics, had high expectations from ‘Fukrey Returns’. Well, the makers and the star cast of the film can sit back and relax as the film is doing well at the Box Office.

Fukrey Returns has collected Rs 8 crore (80 million) net approx. on day one, which is very good. The film has received an amazing response in Delhi and East Punjab.

The makers of the show had a great marketing idea. They released individual character posters, and later the trailer for the movie. Also, the makers of Fukrey Returns have left no stone unturned to promote their film. The songs from the film ‘Tu Mera Bhai Nahi Hai’, ‘Mehbooba’, ‘Peh Gaya Khalara’ and ‘Ishq De Fanniyar’ have further added excitement.

Well, they traded their dreams, making you laugh your guts out in 2013 and they are back with a bang. The star cast of Fukrey Returns in an exclusive interview with Business Of Cinema.com was seen at their candid best. Just like in the film, the Fukrey Returns cast will enthral you in this funny interview as well.

Jugaad boys Pulkit Samrat, Manjot Singh, Varun Sharma pull each other’s leg and reveal the ‘Fukra Panti’ they did during their childhood.