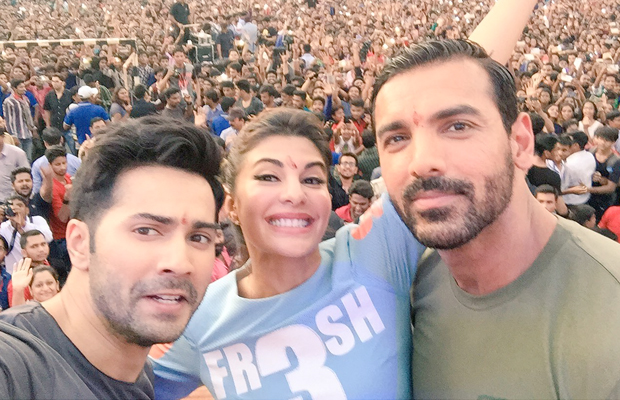 [tps_footer]Stardom has a price to pay and these Bollywood stars surely have to pay a huge  price when it comes to their security. Sometimes stars get mobbed by their fans and it is highly impossible for the stars to get out of the situation. There are few fans who are overly enthusiastic and just misbehave with their loved celebrities in the name of excitement. A similar incident occurred with Jacqueline Fernandez.

As we all know, Jacqueline is gearing up for her much-anticipated film Dishoom which John Abraham and Varun Dhawan in the lead. The trio is touring across India to promote their film.

The cast of the film was recently seen promoting their film at Nagpur and were seen having a blast together, but then the whole scenario became uncomfortable when an over-excited fan tried to ambush Jacqueline when the cast was returning back to their hotel.  Luckily Varun Dhawan and John Abraham came to her rescue and escorted Jacqueline to the elevator. A source said, Varun and John handled the entire situation really well.

Sometimes, fans actually forget the differences between enthusiasm and indecency. On the same note, Dishoom is all set to hit the theater on July 24, 2016.[/tps_footer]