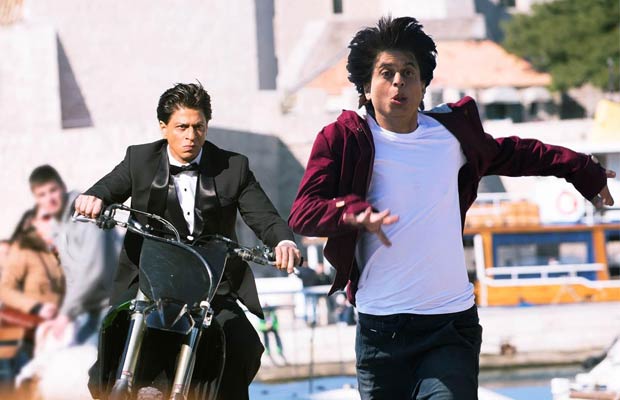 [tps_footer]Writer Habib Faisal has built complexity and layers into the potent idea of a fan’s obsession with his idol. This is an amazing idea for a dark and twisted thriller — the crazy and symbiotic relationship between celebrities and their fans.

Gaurav Chandna (Shah Rukh Khan) is obsessed with superstar Aryan Khanna (Shah Rukh Khan). It’s almost providential that he also happens to be Aryan’s doppelganger, referring to himself as Junior Aryan Khanna. Faisal and director Maneesh Sharma open up a Pandora’s box on the psychological downside to deep adoration and idol worship through Gaurav’s one-sided love for Aryan.

Gaurav runs a cyber centre in Delhi but dreams of travelling to Mumbai, just like Aryan did – without the ticket, and plans to stay at the same hotel Aryan stayed at during his days of struggle. Aryan Khanna’s life draws exactly from Shah Rukh Khan’s – the film clips, interviews, speeches Gaurav inhales and imbibes are all real clips from Khan’s life and career. Khanna too lives at a palatial seaside mansion, has two children and a glamorous wife (Waluscha De Sousa), a second home in London and a sea of fans waiting for a glimpse outside his house.

The sycophancy is slightly annoying but there is enough fiction too (and lots of holes in the plot). Fortunately, Shah Rukh Khan is not playing himself when he is acting as Aryan. Aryan is egotistical, harsh, and not particularly likeable. SRK as Gaurav, on the other hand, brings pathos to the character. We feel for the misled, heartbroken boy who has seen his angel fall from grace, and made sure he is humiliated on the way down. Greg Cannom’s terrific makeup work on Khan contributes in large measure to this believability and the success of the double role.

Also on the upside are Manu Anand’s camerawork and Andrea Guerra’s notable background music. On the downside are the three endless action sequences and one major flaw – no one who encounters Gaurav acknowledges or remarks on their uncanny resemblance. It’s as if only Gaurav sees it.

Snubbed and ill-treated by Aryan, a wounded and distraught Gaurav begins to plot Aryan’s downfall. With this, the film explores notions of the fragility of stardom and fame, the egos of stars, their influence but equally their lack of privacy and their commoditization.

‘Fan’ opens a small window into the fish bowl existence of superstars most poignant as Khan plays a fan in a swell of the nameless multitude the superstar waves at, dances for and thanks in his speeches. You cannot ignore the ironic reference to Salman Khan whose wax statue watches Gaurav manhandle Aryan’s effigy in the wax museum. Shah Rukh Khan’s neighbour Salman too attracts hundreds of fans on weekends, desperate for that one glance at their favourite star. It makes Aryans message all the more poignant when he says that fans/ duplicates must not live their lives in the shadow of the star, but make their own identity.

While this is a Shah Rukh Khan shows all way, Waluscha De Souza, Shriya Pilgaonkar, Sayani Gupta, Deepika Amin and Yogendra Tikku step into supporting roles. The most delightful part is seeing Khan perform, transform, and break away from the ego trip and the reverence to play the youthful, gangly Gaurav with a fatal attraction.

Yes, it is rather meta and self-congratulatory. Khan is so convincing as Gaurav playing Aryan – arms outstretched, quiver in the voice and a tilted, dimpled smile – almost a parody of himself, that ‘Fan’ is entirely worth the time to see him step out of his romantic hero/ comic comfort zone and delve into the darker spaces of his life experiences to deliver a performance that will be hard to forget.