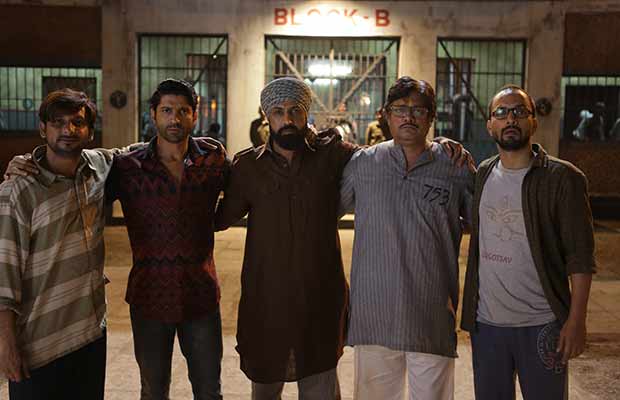 Farhan Akhtar who will be next seen in ‘Lucknow Central’ along with Deepak Dobriyal, Gippy Grewal, Rajesh Sharma and Inaamulhaq took to Twitter to depict the bond he and his fellow jail inmates formed on the sets of  ‘Lucknow Central’.

‘Lucknow Central’ circles around a group of prisoners and their journey while in jail.

As a major part of the Lucknow Central’s story line involved the power packed actors to shoot together, the actors developed a warm bond.

The recently released trailer gave us an insight into the bond shared by the fellow prisoners through their journey to freedom.

The trailer of the film received appreciation and love from not just the audience and critics but also the B-town.

‘Lucknow Central’ exhibits the tale of a simple ambitious man caught in a tragedy that changes his life forever. The film thrives on ambition, passion, friendship, and determination.

The crux of the film is the bond shared by the inmates of ‘Lucknow Central’ jail. It is that bond that helps them draft an escape plan at the risks of their own lives. While the trailer suggests a powerful partnership between the band members, the off screen bond is also quite appreciative.

Farhan Akhtar is assisted by an ensemble cast of Deepak Dobriyal, Gippy Grewal, Rajesh Sharma and Inaamulhaq to form his musical band. The strong equation of the co-stars is very evident as the actor took to Twitter to share about his team mates.

‘Lucknow Central’ is already creating buzz for its mammoth jail set and intriguing storyline. The posters and trailer have just added to the excitement.