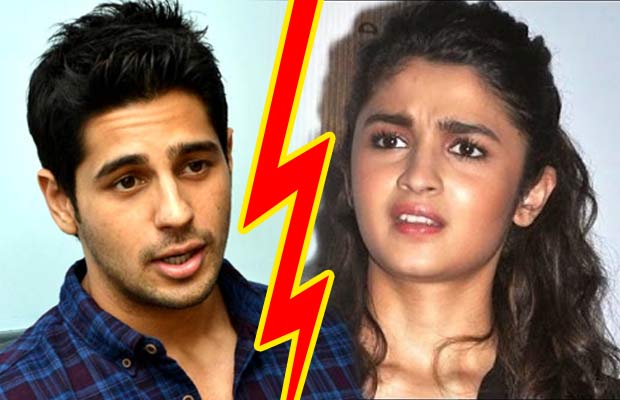 [tps_footer]Sidharth Malhotra and Alia Bhatt are making all the headlines these days for their rumored relationship. The two talent bundles who are at the peak of their careers have still not confessed their relationship amidst the shutterbugs. Many a time the two stars are spotted together and their love errand is now known to all. Well, this year has been ugly for love and romance and the same also goes for Alia and Sidharth.

According to a leading daily, Alia and Sidharth who are tagged as the cutest duo of the tinsel town are apparently entangled in a huge fight. Speculations suggest that the two adorable stars are now not even talking to each other. It is being said that the argument happened while the two were attending Aarti Shetty’s party. The handsome hunk Sid left the party without Alia which made things worse.

It is well known that Sid and Alia have had problems because of Alia’s ex-boyfriend Ali Dadarkar. The Kapoor & Sons actor apparently is miffed over the Highway actress because of Ali’s over friendliness. The duo fought at the party itself.

Reports further state that Sidharth Malhotra and Alia Bhatt were spotted at Karan Johar’s residence. The two entities left in different cars. It is being assumed that Karan is playing the peacemaker between the two and is trying to solve the hassle.

Even though the two actors have never admitted their relationship in front of the paparazzi, indirectly, the two stars have always hinted at the same. During the promotions of their last film ‘Kapoor & Sons Since 1921′, Sid confessed that they get lost completely in each other’s eyes. Likewise, Alia Bhatt also shared openly that she adores him.

Now what turn does this argument take is yet to be seen. We so want them to be together![/tps_footer]