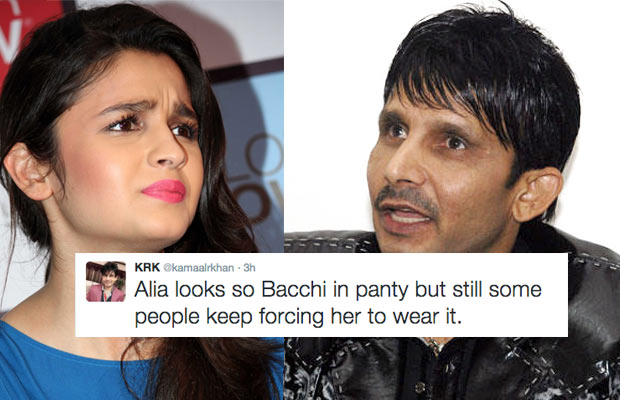 [tps_footer]Recently, Kamaal R Khan aka KRK who is known for his unwanted comments and defamatory remarks against Bollywood actors, made a very bizarre and crass comment on Alia Bhatt’s magazine cover look. KRK came up with a crass comment on his twitter handle. He tweeted, “Alia looks so Bacchi in panty but still some people keep forcing her to wear it.”

Alia Bhatt surely chose not to react on the shameful tweet of KRK, but her alleged boyfriend and co-star Sidharth Malhotra reacted on the tweet and slammed KRK by tweeting, “Sir ! We also try very hard to tell u to shut up but u keep tweeting !” 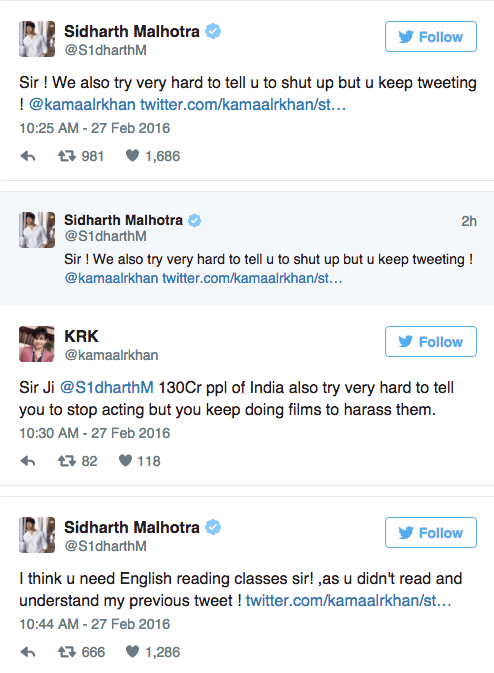 Well, Sidharth Malhotra surely knows how to shut the mouth of the annoying people and he had the best reply to KRK. Well, that’s not the end of the story, earlier today at the magazine cover launch event, Alia Bhatt was asked to react on the same.

While we expected an angry or some kind of reply from Alia, the bubbly actress who is known for her tongue-in-cheek remarks, chose to stay quiet and responded saying that her expressions are enough to speak and that she doesn’t need to react on the same.

Well, Alia Bhatt’s silence clearly showed that she doesn’t think commenting and reacting on KRK is worth. Her silence was enough to slam the annoying KRK. Don’t you think?

On the work front,  Alia Bhatt along with her co-stars Sidharth Malhotra and Fawad Khan has gear up with the promotions of their upcoming film Kapoor & Sons, directed by Shakun Batra and produced by Karan Johar.[/tps_footer]