Recently, Gauahar Khan’s ex-boyfriend Kushal Tandon posted a cover picture of her on Instagram. The picture went viral on the social media in no time. Kushal Tandon’s kind caption on the cover image of Gauahar caught everyone’s attention. Well, things blew out of proportion and the magazine had to make it clear that this month’s cover features ‘Shivaay’ star Ajay Devgn and not Gauhar Khan.

Reportedly, Gauahar Khan landed in a legal trouble after Stardust magazine asked her to delete the picture from her social media handle. The model-turned-actress was asked to pull down the image as it had the magazine’s masthead, which is said to be created by the fans.

Here’s the statement released by Stardust:

Dear Media,
Stardust would like to clarify that the post of Gauahar Khan on Instagram with the Stardust masthead has nothing to do with us. AJAY DEVGN is gracing the cover of Stardust February issue. We have come across a few articles which state that Gauahar is on the cover, so we would like to clear the air by saying that the news is false.
Gauahar was also contacted for the same by us and unfortunately she cannot delete the post as she thinks the media will make news of the same and again question her reconciliation with Kushal Tandon.

And Legal action will be taken against the one who has used the masthead without our permission, thus defying our Company Policy.

In a series of video shared on social media handles, Gauahar Khan has finally broken her silence. She said, “It’s so unprofessional that certain media houses use my personal conversation with them as a quote. It’s sad. And nowhere does the picture state that it was a cover of the said magazine. Also, they have stated that they will take legal action against the people who created it so please calm down!”

The picture clicked by photographer Haider Khan caught Kushal’s attention and he couldn’t stop himself from sharing his ex-girlfriend’s photo. He shared the hot picture of Gauahar on his Instagram with some beautiful words. He captioned the picture as “@haiderkhanhaider saw this picture … click by my brother Haider khan ….. could not risisset my self to share this picture of this stunner ….@gauaharkhan lady with grace , panache, ooomp and style with a golden heart …… 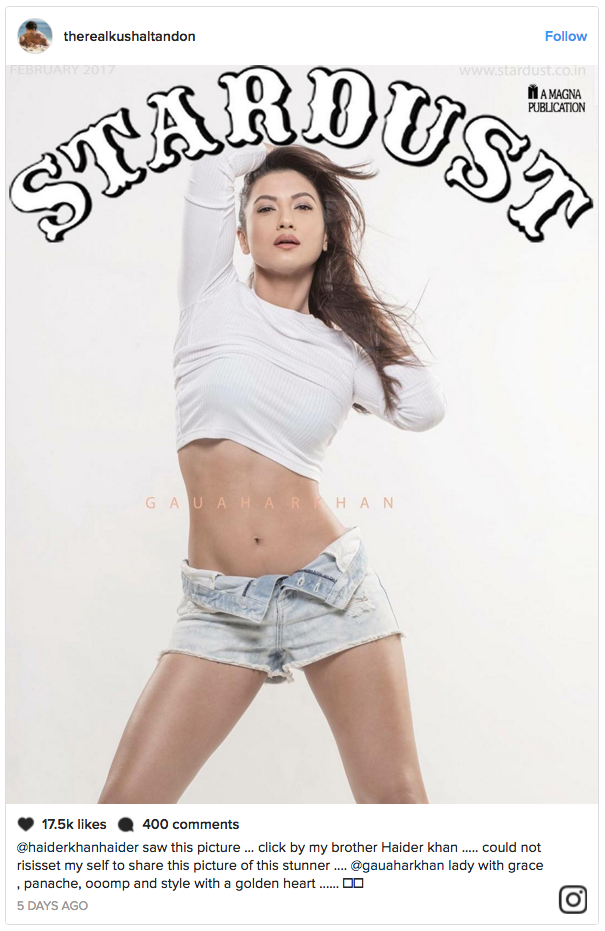