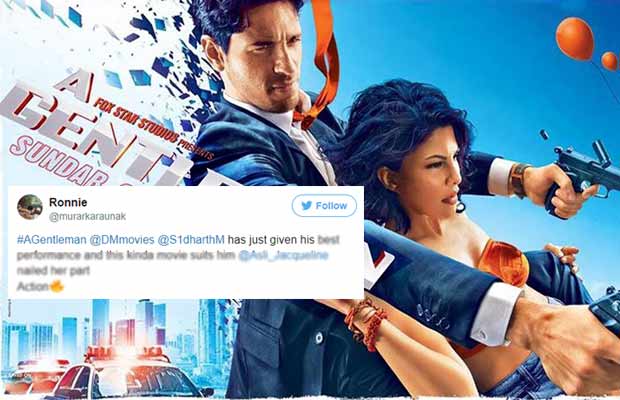 The wait is finally over. The Bollywood actors Sidharth Malhotra and Jacqueline Fernandez are finally on the big screens with their film A Gentleman. The film’s trailer and the songs have been super hit amongst the audience. But has the film managed to impress the viewers?

Many people have watched the first-day first show of the film and have already started to give their personal reviews of the film. People have expressed their opinion on the social media Twitter and the feedback has been mainly positive.

The audience has mainly loved the chemistry between Sid and Jacky. They are also praising the action sequences which see a hot Sidharth fighting and performing deadly stunts.

The film’s trailer has promised some sizzling chemistry between Sidharth and Jacqueline. The songs like Bandook Meri Laila, Chandraleka and Laagi Na Choote have been loved by the people. They have created the required buzz for the film.

The film is has been directed by the talented duo Krishna DK and Raj Nidimoru and has been produced by the Fox Star Studios.

Meanwhile, check out some of the tweets of the people on the movie:

@S1dharthM I love your movie #AGentleman i watched it in Patna(Bihar) first show. Yaar sidharth u r totally A #Action hero. Blockbuster