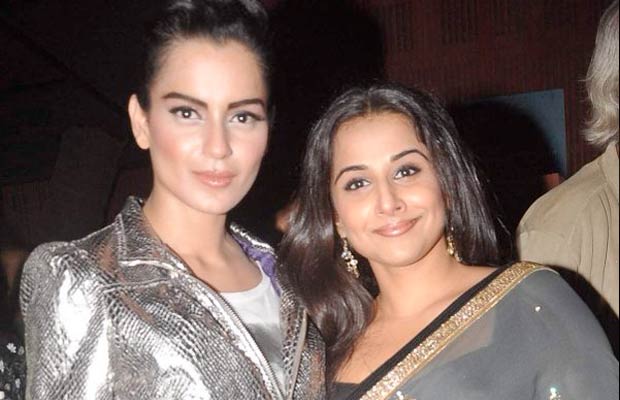 [tps_footer]Bollywood’s ugly legal fight between Hrithik Roshan and Kangana Ranaut have got various reactions from people, inside and outside of B-Town. There are many folks who are ridiculing this childish fight between the two superstars of Bollywood and there are a few who are strongly supporting Hrithik Roshan like is ex-wife Sussanne Khan, Zayed Khan, Kangana‘s ex-flame Adhyayan Suman and his parents Shekhar Suman and Alka Suman have also given their support to Hrithik but finally, Vidya Balan came out in support of Kangana Ranaut and she proved in a way that sisterhood does exist in Bollywood which a writer and columnist Shobha De has been busy commenting about, as no one from Bollywood was coming out to support Kangana and she has been fighting her own legal battle.

Vidya Balan clearly said that she admires the outspokenness, guts, and strength in Kangana Ranaut who is fighting the legal battle on her own without getting any support from any other star in B-Town. Vidya said she doesn’t know who is right and wrong between Hrithik-Kangana and she is no one to decide that but she appreciates Kangana standing up for herself. But, unfortunately, Vidya‘s husband and UTV head Siddharth Roy Kapoor is not happy with Vidya‘s take on supporting Kangana as he is producing Hrithik Roshan-Yami Gautam starred Kaabil and as a channel head he is expected to work with all the stars and Siddharth Roy Kapoor can’t pick a side and ruin his further collaborations with the A-list actors of B-Town. Now Sid feels awkward to face Hrithik after his wife takes a stand for Kangana directly.

Did we just now witnessed the hypocrisy existing in the Bollywood where artists, superstars, and makers claim to be open minded and frank about their opinions and at the same time they want to run away from reality and be good in everyone’s eyes! We are happy to see Vidya Balan taking a direct stand for Kangana Ranaut and we wish her husband Siddharth could have shown his guts and franks opinions too. Now-a-days, females in the entertainment world are giving more tough competition to their male counterparts not just in bagging good projects, payments but also daring to speak their minds and hearts out in the public than to use sugar-coated words to please everyone.[/tps_footer]