There are many actors from Bollywood, cricketer Sachin Tendulkar, and freedom fighter Mahatma Gandhi, whose statues are placed at Madame Tussauds. And guess what? A Tollywood superstar is the first South Indian actor who will find a place at Madame Tussauds! Any guesses? Well, he is none other than our Baahubali! Well, our very handsome, dashing and talented actor, Prabhas.

This good news was shared by Baahubali director S S Rajamouli on his Twitter. In a series of tweets, he lauded Prabhas and expressed his happiness. This statue will be made of his character Amarendra Baahubali from the film.

Prabhas has gained a lot of appreciation for his 2015 blockbuster film, Baahubali: The Beginning. He is currently shooting for the sequel, Baahubali: The Conclusion. The shooting will be wrapped by November 2016. Baahubali 2 will hit the theatre screens on April 28, 2017.

Have a look at his tweets:

Very happy to announce that Madame Tussauds is making a wax statue of our PRABHAS..

The statue will be unvieled at Bangkok in March 2017 and subsequently will be toured all over the world. 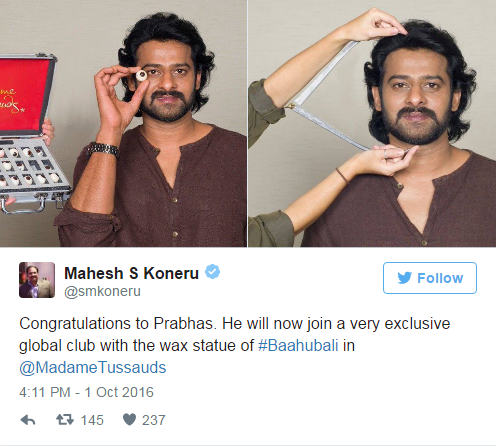