On the occasion of his father’s 81st birthday, Bollywood’s Bhaijaan took to Twitter to dedicate a special wish to Salim Khan along with some unseen old photos. 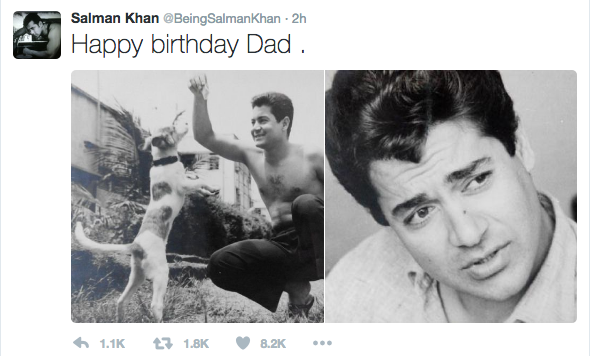 In one of the pictures, Salim Khan is seen shirtless and playing with a dog and in the other picture he is seen posing for the camera. Now we know where Salman gets his physique and good looks from!!

Salim Khan is an extremely supportive father and has always come out publically in support of his son. He is very active on social media and never fails to respond to a negative statement on his son made to tarnish his repute.

Salim Khan is a well-known actor and screenwriter (a part of the prolific duo, Salim-Javed) who wrote blockbusters like Haathi Mere Saathi, Zanjeer, Sholay, Deewar, Trishul, Mr India among others.

He has two wives Sushila Charak (Salma Khan) and actress Helen and is the father of Salman Khan, Sohail Khan and Arbaaz Khan. Khan won Padma Shri in 2014 but rejected it saying he deserves Padma Bhushan.