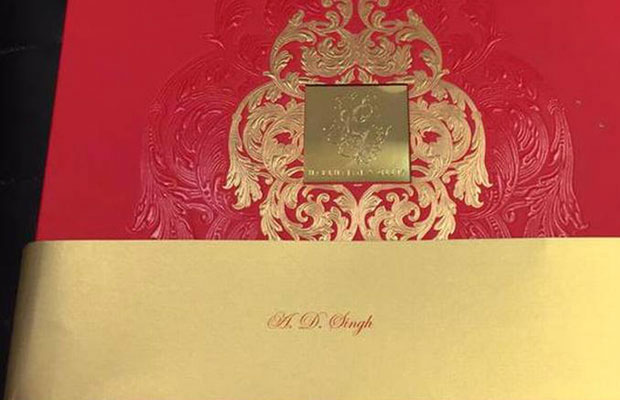 [tps_footer]By now we all know that actress Geeta Basra and Indian cricketer Harbhajan Singh are finally set to tie the knot in next few days. The duo who have been in relationship from very quiet long time have begun with the preparations for their wedding.

We had earlier confirmed that the big fat Punjabi wedding is going to be on October 29 and now we bring the royal wedding card of the couple. One can see the beautiful red card has been packed in the red invitation box along with a box of sweets. The box of the card comes in combination of golden colour with couple’s name embossed on it. The invitation card also includes a admit card which the guests are expected to carry at a wedding reception held at a five star hotel in Delhi. There is also ‘Om’ symbol engraved in Devanagari script on the inner side of the box.

The big fat wedding will be for five days with too many celebrations and much more. Many Bollywood celebrities and the entire Cricket fraternity is expected to attend the wedding. The wedding, an elaborate five-day affair, will take place at Hotel Club Cabana in Phagwana, around 20 km from Jalandhar.

Since many years there have been rumours about Geeta Basra’s secret relationship with Harbhajan Singh but now its no more a secret and the amazing couple are all set for their D-day. Well, It’s another big fat wedding in Indian cricket team after cricketers Dinesh Karthik with Dipika Pallikal and Suresh Raina tied the knot with childhood friend Priyanka Chaudhary, this year.