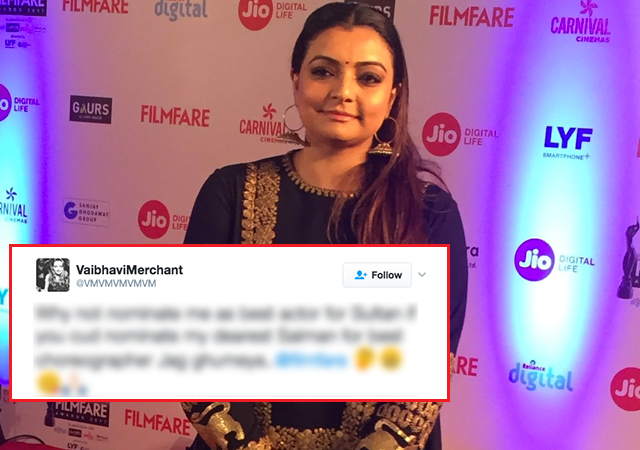 As fans of Bollywood and compulsive viewers of award shows, by now all of us somewhere feel that the awards are rigged and orchestrated to a great extent. In a recent outburst of celebrities specifically targeting the 62nd Jio Filmfare Awards, have brought to light the thoughts and reservations of the celebrities themselves.

Starting with Amaal Maalik talking about how his music in Baaghi didn’t deserve a nomination as there were many better albums in the year. This was followed by Harshvardhan Kapoor who was upset for losing the Filmfare in the best debut male category to Diljit Dosanjh for Udta Punjab and went on a rant about it.

Now, its choreographer Vaibhavi Merchant who took a dig at Filmfare awards for nominating Salman Khan for Best Choreographer for the Jag Ghoomeya song in Sultan despite it being choreographed by her. She had admitted in an interview that Salman came up with the hook step of the song, but she feels it is unfair to make the whole song about one step.

A visibly irked Vaibhavi took to micro-blogging site, Twitter and wrote, ‘Why not nominate me as best actor for Sultan if you could nominate my dearest Salman for best choreographer Jag Ghoomeya?’

She even walked out of event when the actor’s name was announced during the nominations. She is visibly mad at the organizers for their bizarre pick of nominations.

The choreographer was also nominated in the same category for the Nashe Si Chadh Gayee song in Befikre.