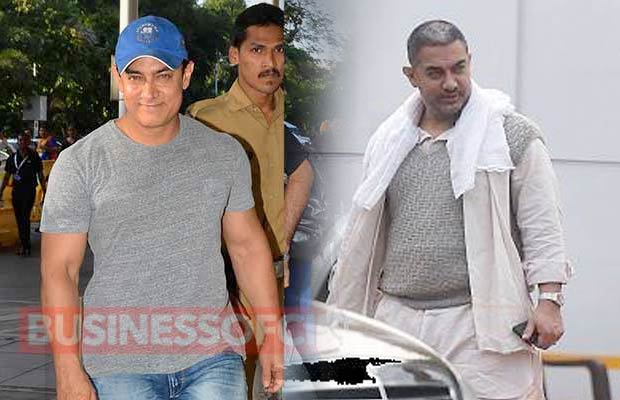 [tps_footer]Aamir Khan has got heads turning after his remarkable weight loss as seen on his birthday in March. The actor underwent rigorous workout sessions to shed the extra kilos he had put on for a part of his upcoming film Dangal.

The part further required the actor to feature in a more toned avatar and Aamir put himself under dedicated workouts to achieve the same.

Aamir Khan is just a few kilos away from his 25- kg weight loss target before he begins shooting for the next schedule of Dangal in June.

He took six months to go from 68 kgs to 93 kgs for his role in Nitesh Tiwari’s Dangal and now he has been sweating it out to knock off all the excess flab. In January this year, Aamir Khan’s target was to lose 25 kgs in 25 weeks with his weight loss programme being monitored in Arizona, US.

On his birthday on March 14, he had shed close to 13 kgs in two- and- a- half months. And at the moment, he is just three kgs away from his target and has a month in hand before the next schedule of Dangal gets underway.

All the actors who are playing wrestlers in the film, including the girls who are playing Aamir’s daughters are given food specially cooked as per their individual requirements. A special cook is appointed on the sets who cooks food which is specifically measured and cooked as per individual requirements. Aamir too eats the food made by this cook.

Aamir has lost 22 kgs already and has a little over a month to put off the three extra kilos. The next schedule of Dangal will kick off on June 15 in Punjab. He will shoot for portions where is required to portray a young Mahavir Phogat. Currently, Aamir is in the US and will be back next week. Aamir’s spokesperson confirms the news.

The film is based on the life of Haryana-based wrestler Mahavir Singh Phogat. who taught wrestling to his daughters Babita Kumari and Geeta Phogat. The film also stars Sakshi Tanwar,Fatima Sana Shaikh and Rajkumar Rao. Dangal is Aamir’s next film after the record breaking film,PK.