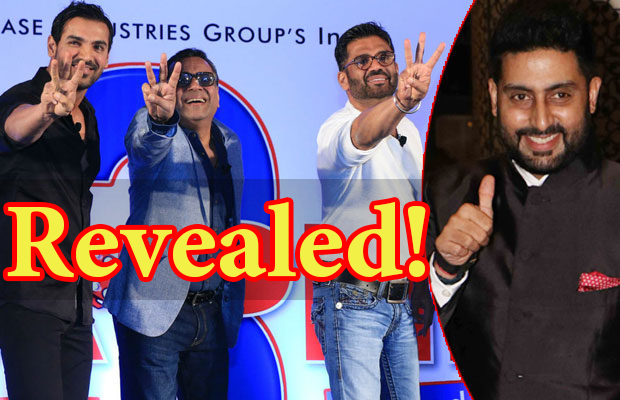 [tps_footer]Bollywood’s gentleman, good actor and a close friend of many stars, Abhishek Bachchan is once again making news for his movies and upcoming projects. Being the son of Amitabh Bachchan who is a phenomenal, legendary actor and even his contemporaries can’t compete him in achievements and brilliant performances. But, unfortunately, Abhishek Bachchan has always faced ruthless comparisons with his father, his kind of movies, awards, achievements, and more. Fortunately, Abhishek Bachchan has been strong enough to take all the criticism and turn it all into a never dying motivation to keep himself busy working in movies, he bought a Kabaddi team too, Abhishek is moving ahead constructively even after facing a lot of health issues.

We all know that Abhishek Bachchan was asked to take a complete bed rest for a month as the doctors diagnosed him with the slipped disc and still Junior Bachchan wanted to keep working and enjoy playing with his daughter Aaradhya. His wife, the most beautiful woman, Aishwarya Rai Bachchan has been a big support for Abhi and we never heard of any trouble between this powerful couple. Now, Aishwarya is busy promoting her upcoming movie Sarbjit and Abhishek Bachchan is busy promoting Housefull 3 along with Akshay Kumar, Ritesh Deshmukh, and more.

Although Abhishek Bachchan was very excited to be part of Hera Pheri 3 which has been a very successful franchise of 2006 movie Hera Pheri which starred Paresh Rawal, Suniel Shetty, and Akshay Kumar. But, unfortunately, Abhishek has backed out of this franchise and he said things didn’t work out between him and the makers. This movie has been shelved a lot of times and it has been facing delays just like Jagga Jasoos. Till today Ranbir Kapoor -Katrina Kaif are trying to complete the movie even after a bitter split but over here the situation is different. Abhishek didn’t reveal much about his difference with the makers or if he was not pleased with his character. But, he has confirmed this news straight away with the media that he won’t be part of Hera Pheri 3.[/tps_footer]