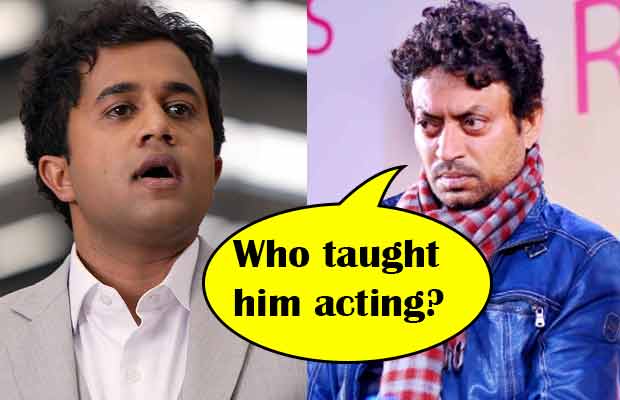 Do you remember Chatur Ramalingam, the annoying NRI student from 3 Idiots? Well he is back in Bollywood and this time he has annoyed Irrfan Khan for real!

It happened on the sets of the an upcoming comedy flick titled Raita.

Omi Vaidya, the Indian-American actor who won over millions of fans with his turn as Chatur Ramalingam in 3 Idiots, is making his comeback with the film.

Irrfan Khan is playing the lead in Raita and the two actors were shooting a scene together in a Mumbai studio. Director Abhinay Deo was helming the scene but Omi Vaidya kept slipping out.

One take, then the second and on and on it went! Omi could not deliver the scene even after two hours!

Irrfan Khan, who started off patiently, was fuming by the end of it. Reports suggest that Irrfan smoked two packets of cigarettes in frustration.

Omi Vaidya took so many retakes that Irrfan Khan finally went up to the director and quipped, ‘Isko acting kisne sikhayi?’. (Who taught him acting?)

Director Abhinay too was at his wit’s end by that time and finally got up from his seat and gave Omi a stern warning.

Abhinay Deo’s Raita went on floors in April & Omi joined the cast in May. Raita is a quirky comedy based in Mumbai.

Omi was last seen in the 2012 flop Players which also starred Abhishek Bachchan.

Irrfan Khan meanwhile has won plaudits for his latest release, Hindi Medium, which takes on the education system of the country.