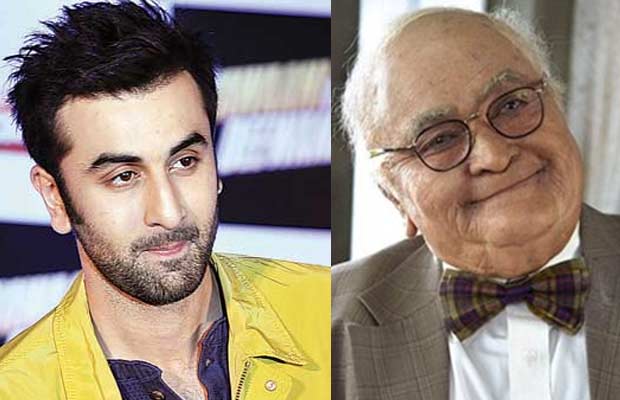 [tps_footer]Ranbir Kapoor and Rishi Kapoor are a highly talented father son duo. The two magnificent stars are the super actors of their respective generations. Veteran actor Rishi Kapoor is all set to flaunt his acting skills in the film ‘Kapoor & Sons since 1921′. The movie stars Alia Bhatt, Sidharth Malhotra and Fawad Khan in lead roles along with Rishi Kapoor, Ratna Pathak and Rajat Kapoor in pivotal roles.

Seems like dashing star Ranbir is all impressed by father Rishi Kapoor’s performance in the film. The Tamasha actor was snapped while he attended the screening of the film. Looking all content with the movie, Ranbir gave thumbs up to the shutterbugs.

The actor was heard sharing that he is flattered by his father’s performance and added that he (Rishi Kapoor) is looking too cute in the film. The veteran Kapoor actor will be seen playing the role of a 90 year old man who is the head of the family.

‘Kapoor & Sons Since 1921’ is much awaited by the masses for its star cast. The film is speculated to be a concoction of family drama and romance. With Ranbir giving such a positive review to the film we are sure the film is going to be good.

Directed by Shakun Batra, the star studded movie is all set to hit the screens on March 18th, 2016 i.e. tomorrow. The songs of the film have already made a mark on the minds of the audience. Now whether the film actually impresses the watchers or no, only time will tell.

Ranbir Kapoor on the other hand will soon be seen in ‘Jagga Jasoos’. The actor is also prepping up for Sanjay Dutt biopic.[/tps_footer]