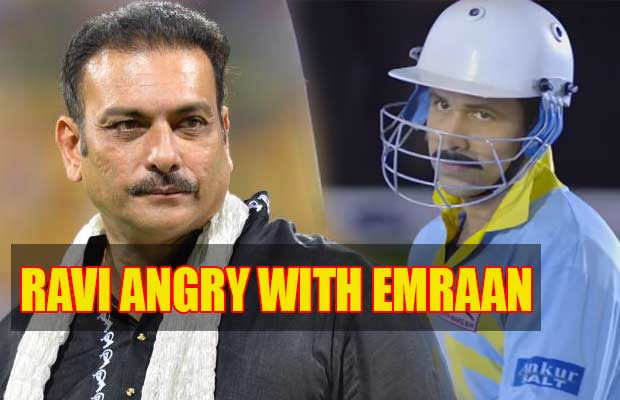 [tps_footer]Emraan Hashmi’s newest flick ‘Azhar’ has been embroiled in so much controversy that we just cannot believe that the movie has not even completed a week after release. The movie seems to have rubbed too many people the wrong way and after the beautiful Sangeeta Bijlani, the movie now seems to have pissed off Ravi Shastri. ‘Azhar’ which is biopic based on the life of cricketer Mohammed Azharuddin has left the former Director for the Indian cricket team, Ravi Shastri livid!

The left arm spinner and right hand batsmen was popular among women in his heydays and was well-known for winning the ‘Champion of Champions‘ trophy in the World Championship of Cricket in Australia in 1985. Ravi Shastri’s role has been essayed by Gautam Gulati in the film and apparently the portrayal of the most charismatic Indian cricketer has been improper and way too sensationalized. According to Shastri, director Tony D’Souza has stretched this fact to a limit and the veteran Indian cricketer has found his portrayal objectionable.

Ravi Shastri is painted as a womanizer in the film and is even shown cheating on his wife during a tour where she accompanies him. Ravi Shastri has complained to the cricket authorities over this issue and is not at all happy according to reports. While the filmmakers have made sure to include a disclaimer at the start of the film stating that the film is not a biopic, it has not deterred many people from taking offence.

Hashmi who has taken a lot of pain to portray Azhar’s role perfectly seems to be getting more attention for the controversies than his stellar performance. The movie also stars Nargis Fakhri, Prachi Desai and Lara Dutta in crucial roles.[/tps_footer]