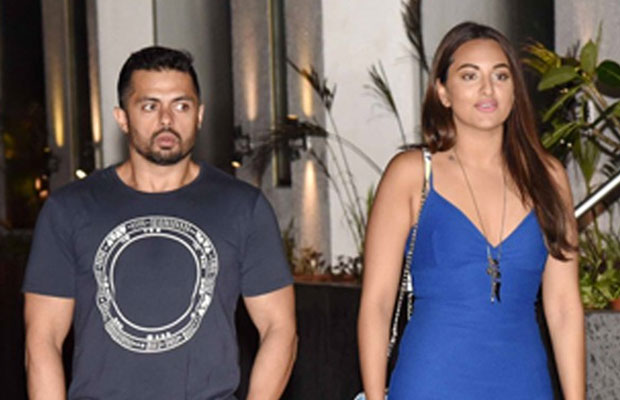 There are rumours doing the rounds for quite a long time now about Sonakshi Sinha’s alleged link up with beau Bunty Sajdeh. It has become a talk of the town that the duo has been dating since a long time. To tell you, Bunty Sajdeh is Sohail Khan’s brother-in-law and according to the rumours, both of them started dating since 2012 when Bunty began managing her endorsement deals. Sonakshi Sinha has never opened up about her relationship status before. The actress bashed the rumours during the promotions of her film Akira.

But with time and again, the couple never failed to make the headlines when they were spotted together at a club. There were also speculations that both had a secret engagement. However, we don’t know if the rumours are true or not, but Sonakshi Sinha is raising a lot of eyebrows with the on-going rumours with her beau.

In an interview with Filmfare, the Dabangg actress was asked about the same. Sonakshi gave a very perfect reply to clear the air. She replied, “No comments! Do you see a ring on my finger? No na? Then? Does this answer your question?” Sonakshi gave a very fitting reply to the rumours surrounding her love life.

Moving to her professional life, Sonkashi Sinha who was last seen in Akira will be next seen in a action thriller film Force 2 which is a sequel to the 2011 Film Force. Force 2 also stars John Abraham and it is slated to release on November 18, 2016.