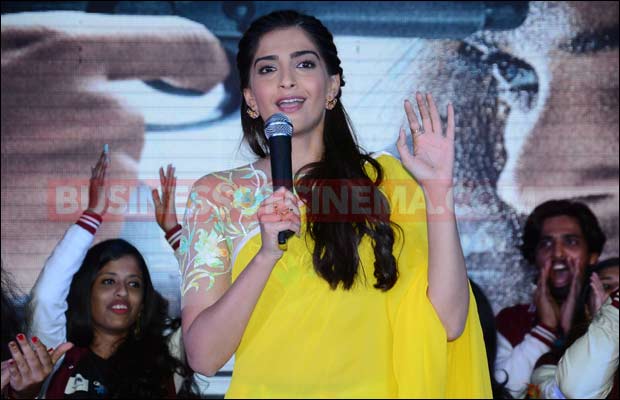 [tps_footer]Sonam Kapoor has surprised us all with an effortlessly amazing portrayal of Neerja Bhanot in her recently relased flick ‘Neerja’. While the movie has been a hit in India, it was also very well-received by audiences and critics across the globe. However, the film has been banned in Pakistan for allegedly showing Pakistan in a negative light.

Because of this ban, fans of the ‘Saawariya’ actress who wanted to see the film have resorted to watching the film on pirated copies. The film is based on the life of Neerja Bhanot, the Pan Am air hostess who sacrificed her life while saving passengers on board hijacked flight 73. The actress who recently had a live chat with fans on a social networking site; learned of this through her fans and was visibly upset about this.

According to her, the film has been banned purely on political grounds. She said that politics should not play such a pivotal role when it comes to art. After all, we were essentially the same country 60 years ago, she adds. Furthermore, she said that in her boarding school days the Indians and Pakistanis on campus would always hang out together except during cricket matches where the two teams played opposite each other. Sonam believes that the people of the two neighboring countries shared the same taste and it was unfair that they could not enjoy the film.

Recently the director of the film, Ram Madhavani had gone on record saying that he hoped Pakistan would reconsider the ban. Shabana Azmi, who has essayed the role of Sonam’s mother in the film was in agrrement of the same.

Well, let’s just hope that the Pakistani fans will be able to enjoy the film soon![/tps_footer]