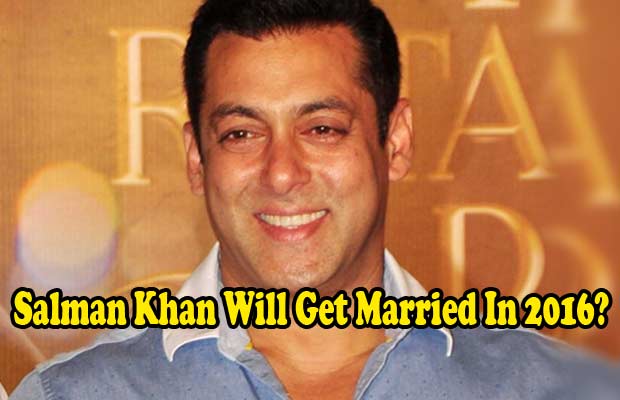 [tps_footer]Bollywood star Salman Khan has been dodging the question of marriage since ages now and recently we revealed the real reason behind it. Earlier we informed you that according to director Subhash Ghai, the real reason why Salman could not get married was the ongoing case regarding the 2002 hit and run case. But now that the case is over and Salman Khan has walked free of all charges, what can possibly stop the actor from getting married in 2016? Well finally the time has come where the world might get to see India’s most eligible bachelor tying the knot.

Salman Khan was acquitted of all the charges against him in the 2002 Hit and Run case and after 13 years of constant worries the actor finally walked free. Bollywood stars were all happy for the actor and surely his family must also be relieved now. All the charges against the actor were dropped by the HC due to lack of evidence provided by the prosecution that could actually prove that Salman Khan was drunk on the night of the accident when his car rammed into a family sleeping on the footpath, killing one and injuring four. After being released from all charges levied against him in the hit and run case, the actor can now peacefully welcome the new year by leaving this horrifying past behind.

For a very long time both Salman Khan and his family members were worried sick about the final verdict of this case. Which is the reason why the actor did not get married till date as he obviously did not want to jeopardize the life of his better half as well. After walking free from the court, marriage might soon be on the cards for the actor and going by all the rumours around, we are guessing it can be model Lulia Vantur who might be the lucky one Salman gets hitched to. But we would like the actor to himself announce his marriage next year, before making any more assumptions. What do you think, will 2016 be the year Salman Khan finally gets married? Only time will tell.[/tps_footer]