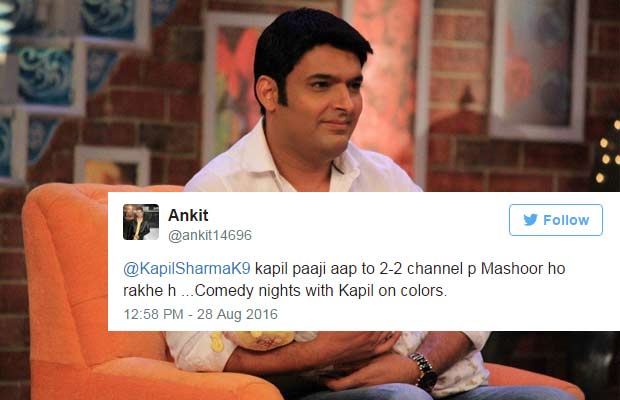 Kapil Sharma and channel Colors Tv spat resulted in the shut down of his popular comedy show, Comedy Nights With Kapil. Later, he started a new comedy show on the rival Sony Tv, The Kapil Sharma Show. Well, the fight was so much in news, that one though Colors will never even befriend Kapil. Well, we all were surprised when a week ago an episode from Kapil’s former show was shown on Colors. It later came out that the Colors channel is struggling for TRP, and hence they again showed an episode where Salman Khan was the guest. If that wasn’t enough, the channel today again telecasted another episode feature Shah Rukh Khan, Kajol and his Dilwale team. Well, just like you, even we are surprised that despite having such a bad tiff, and after not even telecasting Kapil’s last episode of CNWK, the channel is using his old show to gain TRPs now.

Well, the social world has various reactions on Colors showing CNWK special episodes. Here’s how Twitter world reacted on this:

@ColorsTV rerun of comedy nights with kapil now ! Sense of deja vu by the channel ? Again shows who is the best @KapilSharmaK9

@KapilSharmaK9 sir y colors is still showing ur best episodes… of comedy nights with kapil? They might have dropped their trip😂😂