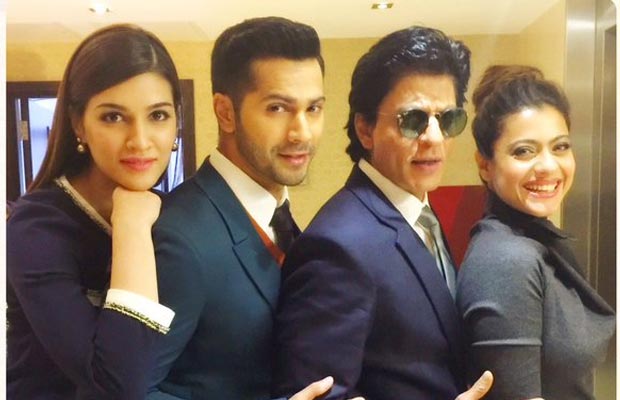 [tps_footer]Bollywood actor Varun Dhawan is on last leg of promotions for his upcoming movie ‘Dilwale’. The action packed family entertainer stars Bollywood’s superstar Shah Rukh Khan, Kajol and Kriti Sanon. ‘Dilwale’ actors were in the capital, where they were seen grooving to the tunes of the recently launched peppy song, ‘Tukur Tukur’ from the movie, as the audiences were seen rooting for them.  While the promotional tour is coming to an end, Varun Dhawan is already getting emotional about ‘Dilwale’ journey.

Varun will be seen playing Shah Rukh Khan’s brother. The entire team of the film has left no stones unturned in promotions. From London to Dubai, daily soaps to reality shows, the cast has promoted the movie in every possible way. Varun took to twitter today to share his emotions about the movie and how grateful he is to have worked with such great names in Bollywood. Varun thanked Rohit Shetty and the team with whom he got a chance to work with. This is what the actor had to say. 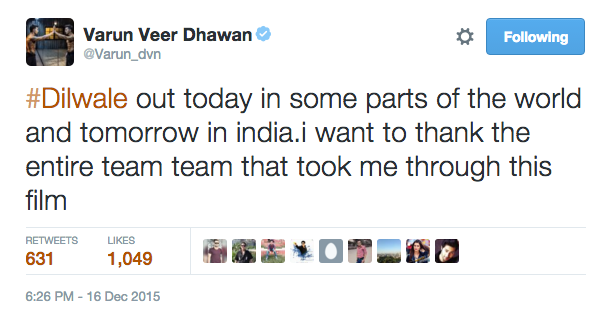 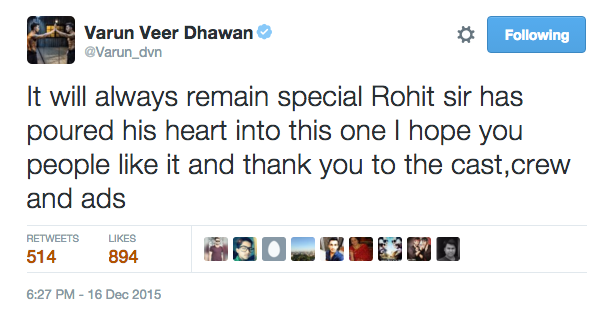 The highly anticipated movie ‘Dilwale’ is releasing tomorrow December 18, 2015. Directed by Rohit Shetty, the movie is clashing with maverick filmmaker Sanjay Leela Bhansali’s,‘Bajirao Mastani’. Two of the most awaited movies of the year are clashing and we are excited to watch who will rule at the box office.[/tps_footer]