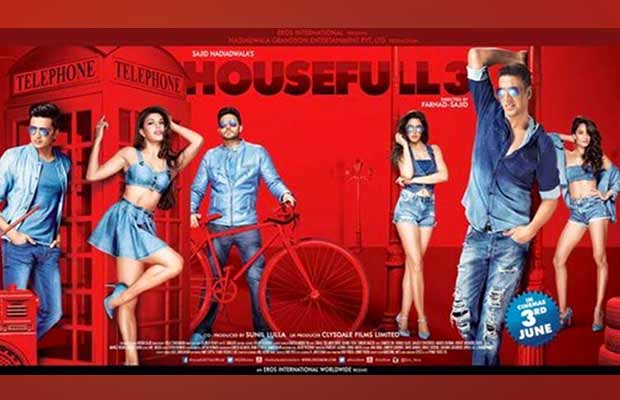 [tps_footer]Housefull 3 has only heard laughter and whistles by the audiences right from it’s first day of release! So much so that the first day collection was the highest so far in this year.

This franchise film opened to the biggest opening of the year despite being a working Friday. It is also Akshay Kumar’s second best opening after Rowdy Rathore and this year’s biggest weekend collection as well.

Eros International & Nadiadwala Grandson Entertainment’s franchise film has laughed its way off at the box office and is continuing to rake in the moolah by giving audiences a dose of laughter in their otherwise stressful lives.

The film has set a high benchmark for comedy films to cross. What is known to be one of the most effective way of a film generating more numbers is audience’s words of mouth which is proving to be in complete favor for this laugh riot.

Trade gurus further helped us give more insight into the reasons for the success of the film. A trade analyst shared, “Housefull3 was a complete joy ride for me. There were humungous expectations with the franchise and the film lived up to it. To remain smiling for 2 hours nonstop is no small feat. Don’t look for logic, it offers plenty of laughs, just enjoy the ride.”

Kamal Gianchandani, President PVR Cinemas further adds, “It’s been a while since we have seen audiences flocking to theatres in such a big way. Housefull 3 has created that kind of frenzy and the word of mouth is super . The verdict is unanimous. People across age group are loving and we are confident that the film will have a spectacular run at the box office.”[/tps_footer]