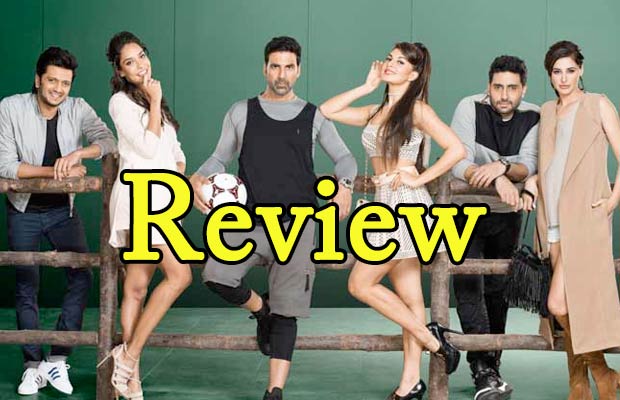 Irani plays Batook Patel, a millionaire with three unmarried daughters living the grand life in a vast English house. The daughters – Ganga, Jamuna and Saraswati (Fernandez, Haydon and Fakhri respectively) are no spring chickens. Innocent by day and party animals by night, each one has a secret boyfriend. All three decide to marry at the same time and suddenly Patel’s house is full of able men pretending to be disabled wishing to marry his daughters and snag a share of their inheritance. But Patel does not want his girls to marry claiming that their family is jinxed with bad luck in that department.

Anyway nothing is as it appears. Patel is not really the father. The estate does not really belong to him but to a Mumbai based gangster named Urja Nagre (Shroff) and the three goons seen stealing diamonds in the opening scene do make a comeback. Chunkey Pandey is there too, with his bad Italian accent serving up Aakhri Pasta.

The jokes are in bad taste or so lowest common denominator that they are an insult to intelligence. Farhad–Sajid resort to their usual antics of repeating the same gag over and over again and try to be meta by referencing other Bollywood movies and stars. Abhishek Bachchan, as always, has to pay obeisance to his father Amitabh and this time even rescues the waxwork of his wife Aishwarya during a tediously long climax in a wax museum. This one is strictly for fans of the franchise. Strictly!