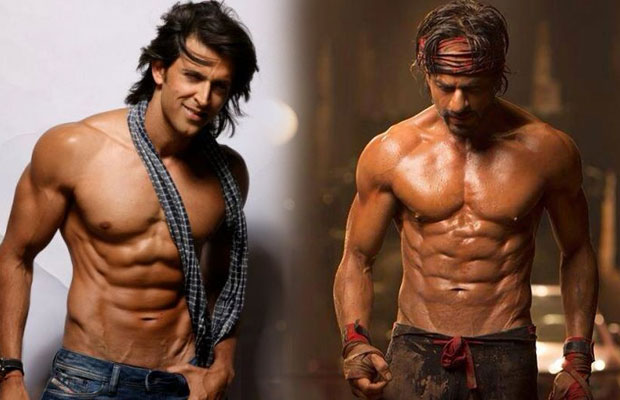 King Khan Shah Rukh recently went live on fame and this time, his appearance was about all things fitness. The superstar had gone shirtless for the much-loved song Dard e disco in Om Shanti Om for his best friend Farah Khan and the star’s eight-pack abs that he carved for the song became a huge rage among his fans. The star was requested by many to come with his fitness secrets and he finally obliged them all with his appearance on fame.
The interview was shot at a very special place. Much to the fans’ pleasure, fame shot the star live in his gym. Shah Rukh Khan not only showed his gym in the live chat on fame but also revealed some interesting secrets. However, this is the most amusing of all the secrets he revealed.

King Khan, who is an inspiration for lakhs of people, himself has an inspiration in the industry. Yes, you read that right. There is one contemporary actor SRK looks upto for all his gym motivations. And the actor is none other than our very own Bollywood superhero, Hrithik Roshan. The Baadshah of Bollywood looks at a particular picture of the Mohenjo Daro star. Here is the picture which provides SRK his fitness inspiration:

Hrithik Roshan has a huge fan following thanks to his fantastic toned physique and SRK is no exception. The Baadshah was all praises for Hrithik’s well-toned body and said that he looks upto Jr Roshan for all his fitness motivations.

Well, now this is really sweet on SRK’S part to keep aside all the Box Office clash tensions and embrace his appreciation for Hrithik positively.