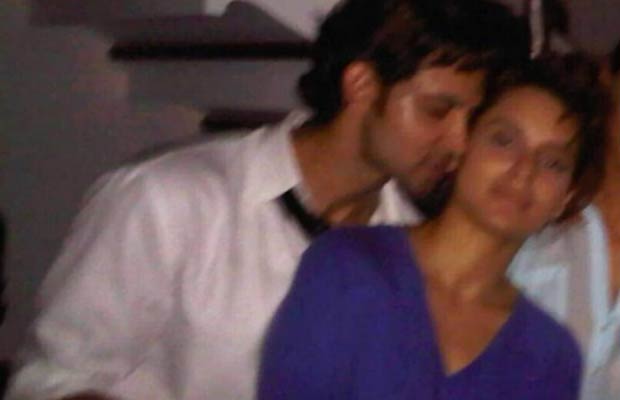 [tps_footer]Hrithik Roshan and Kangana Ranaut’s legal mess is very confusing. With new and unknown revelations every now and then it has surely become very difficult to decide who is at fault. After Kangana’s emails were leaked online, it was evident to conclude that it was a one-sided relationship between the actress and Hrithik. The Bang Bang actor also urged that there is an imposter involved in the emails and he was not the one interacting.

The investigation reports also hinted at the same and Hrithik Roshan was assumed to be innocent. The latest revelation is that of the leaked picture. The picture sees Roshan hugging Kangana cozily. The picture is all over the social media and has also created a doubt over Hrithik’s statements. The actor had always maintained that he interacted with Kangana only on a professional basis and did not know her personally.

According to reports, this leaked photograph was taken at a party which was hosted at Arjun Rampal’s house. The leaked picture has surely claimed that the relationship was not one-sided as it was assumed in the first place.

Sources close to Kangana Ranaut have now shared that Kangana is not fighting the case to prove her relationship with Hrithik. The sources added that there is no way she can prove it even if it is true because he has himself denied it. Moreover, close allies of Ranaut have stated that the leaked picture is itself the proof of their closeness. They have also urged that if Hrithik Roshan gives false perceptions more pictures of the two might get leaked.

Seems like, this war is going to get more ugly than imagined![/tps_footer]