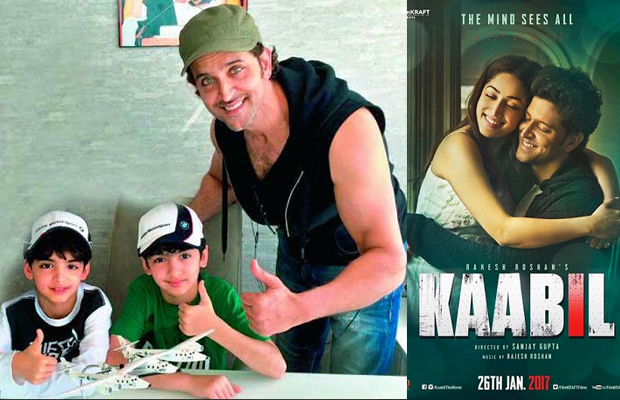 Hrithik Roshan likes to spend quality time with his sons, Hridhaan and Hrehaan. In a recent event, the actor opened up on how honestly his kids review his performance in films.

The actor was heard saying what his kids feel about his upcoming movie ‘Kaabil‘. He said, “Where Kaabil is concerned, they’re well aware of Mohenjo Daro’s failure and it didn’t do that well. I remember they watched the film after it was termed as a failure and when they came back, they were like ‘it’s ok.’ But for Kaabil, they are very excited and I think they want the film to do well and that’s very heartening.”

Hrithik recalled an old incident when his sons once came to see him when he was shooting for Krrish 3. He reported, “I remember when Hridhaan and Hrehaan came to the sets of Krrish 3, they saw me for the first time in the Krrish outfit and I was up on a 200-feet cliff and taking one somersault and flying down. I remember they both were so quiet and I wanted some feedback ki what do you feel? But they were just so silent and I couldn’t understand then and I still haven’t understood that why they were that silent!”

Further he continued, “For them, it must be like that my father is so normal at home. They are very observant and but they never speak up what they are feeling inside. I think they feel a bit pressurized that some day they’ll also have to stand on that height and jump and they have to take up the challenge.”

We are super excited for your movie and hope that it does well!