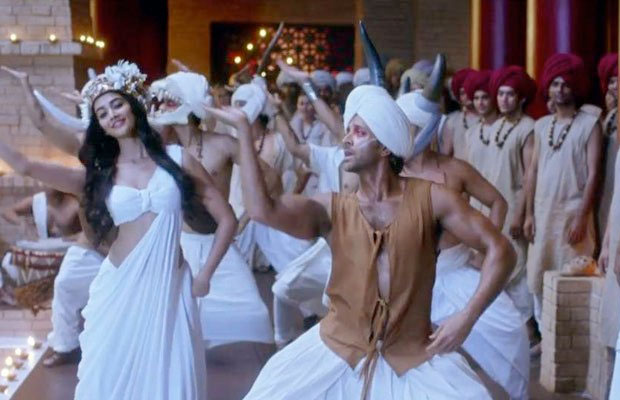 The first song of Hrithik Roshan‘s much-awaited action-romance ‘Mohenjo Daro’ is out and is simply a soulful romantic number.

Sarman (Hrithik Roshan) gets disguised as a background dancer to woo Chaani (Pooja Hegde) in MohenjoDaro’s new song ‘Tu  hai’.
India’s renowned music maestro, A.R Rahman has mesmerized the audience once again by giving a double dose of his talent, by not only composing but also lending his voice for it.

A.R Rahman has made a mark in the musical world and is popular for his exceptional musical skills not only in India but Internationally too. He is known for his soothing music in addition to his soulful voice.

Rahman‘s tunes are widely loved for their exceptional compositions.

A.R Rahman‘s Tum ho is set to be the first song from Ashutosh Gowariker’s magnum opus Mohenjo Daro to release.

In the past Ashutosh and A.R Rahman have joined hands for many ventures and the same have proved to be a big Hit amidst the audience.

The duo, when unite create magic with songs like Chale Chalo from Lagaan, Yeh Jo Des from Swades and Khwaja from Jodhaa Akbar and their latest collaboration, Tu Hai from Mohenjo Daro further gives proof of the same.

Director Ashutosh Gowariker said, “It has been a rewarding experience as we both got the chance to enter an entirely different space and time. We had to build a lot from imagination, and we did that after doing research and consulting the archaeologists about the possibilities and probabilities of this period, which does not get categorised as History, but as Pre-history! I stayed within the findings from the excavations and the artefacts, while creating a make-believe world. And Rahman has helped shape that world beautifully, exotically and believably.”

Hrithik took to social media to Thank A.R Rahman and tweeted, “I sometimes watch u in wonder.Hw cn 1 human being b capable of so much brilliance.Thank u 4 d magic sir #MohenjoDaro”

Further commenting about his stunning co-star Pooja Hegde, Hrithik wrote, “And if u say u can’t take your eyes off @hegdepooja then U haven’t seen anything YET. Trust me! #TuHai”

Crooned by A.R. Rahman and Sanah Moidutty, the slow soulful song shows off a cute chemistry between the leads.

Mohenjo Daro, is a film set in the pre historic Era and features a love story between the lead cast, Hrithik Roshan and newbie Pooja Hegde.

Mohenjo Daro’s trailer released and proved to be a visual spectacle.

There is a lot of anticipation for the release of the film, with the audience awaiting Hrithik’s association with Ashutosh Gowariker post-Jodhaa Akbar.

Produced by Siddharth Roy Kapur and Sunita Gowariker, Mohenjo Daro is Directed by Ashutosh Gowariker and is slated to release on August 12th, 2016.