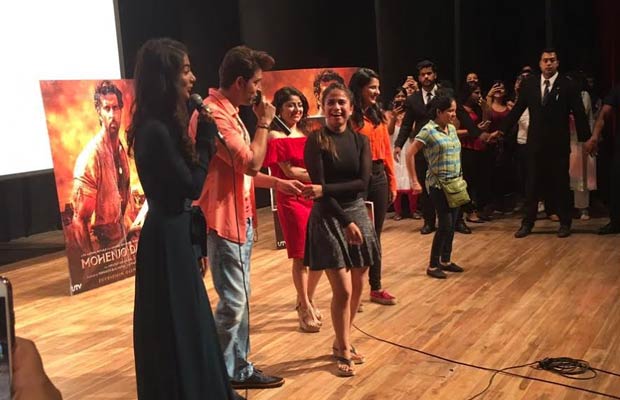 Hrithik Roshan who visited the capital city, Delhi along with co-star Pooja Hegde to promote his upcoming film Mohenjo Daro gave an impromptu gift to a girl fan on learning about it being her birthday.

The Mohenjo Daro team visited a Gargi Girl’s College in Delhi on Friday.

There was a frenzy when Hrithik reached the premises of the college.

Both Hrithik and Pooja had a fun interaction with the college student present.

A few girls even joined Hrithik and Pooja on stage as they danced to the tunes of Mohenjo Daro.

It was during this time that a girl fan told Hrithik that it was her birthday and expressed her wish to dance with the Superstar.

On learning about the girl’s special day, Hrithik wished her and immediately got to shaking a leg with her on his much-loved song, Senorita from Zindagi Na Milegi Dobara.

Hrithik‘s sweet gesture, sure made the girl’s day who’s wish came true in an instant.

The actor along with the Mohenjo Daro team is on a promotional spree for his upcoming film, Mohenjo Daro.

The film’s rushes prove that Mohenjo Daro is set to be a complete entertainer with action and romance in abundance in addition to Hrithik Roshan and his exhilarating dancing combined with the freshness brought to celluloid by Pooja Hedge, all under Ashutosh Gowariker‘s direction.

Ashutosh Gowariker‘s Mohenjo Daro is an action-romance set in the Pre historic Era of Mohenjo Daro, a subject which intrigues many children and teenagers in a perfect blend of a story which is to leave the adults and the children, touched with romance and thrilled with action.

Mohenjo Daro is touted to be one of the most anticipated movies of 2016 as we can see the Rahman, Ashutosh, and Hrithik triumvirate after Jodhaa Akbar.