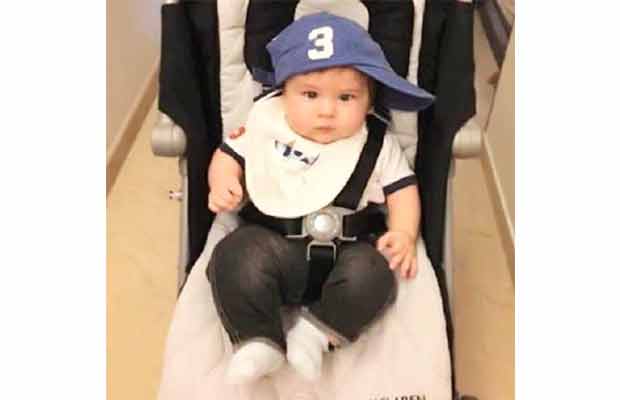 Taimur Ali Khan looks as cute as a button in this new picture!

Taimur Ali Khan, the star kid, has been in talks since the day he was born. From his picture with his parents posing with him in the balcony to his father’s Whatsapp display picture that went viral, the chap has always looked adorable.

Now there’s another picture of the toddler surfaced on the internet, in which the baby is looking exceptionally cute. The Bollywood couple, Kareena Kapoor Khan – Saif Ali Khan’s son Taimur Ali Khan has grown up to be the cutest star kid. We are pretty much sure that he is going to give a tough competition to other star kids.

When his father Saif was asked about this earlier, he had said, “There is so much pressure on kids these days to be good-looking. I just hope he is a good guy. He is not the only star kid in town, there are so many. But sometimes people make it difficult, and some sections of the press pay too much attention. So, it’s hard to be normal, but I guess that goes with the territory. I think I was quite normal, or probably not (laughs).”

The child’s mother, Kareena recently went to London to shoot for a tea brand. But the actress decided to not take the child with him as she did not want the baby to fall sick in the unpredictable weather of London. But as good parents, they had someone to be around the little munchkin, as the father Saif decided to postpone his work to be there for him. Well, that’s some good parenting, right?

Recently, the famous filmmaker Karan Johar, in an interview with a daily revealed how he wants Kareena and Taimur to join him and his twins Yash and Roohi for a vacation. He said, “I’m also looking forward to them travelling with me when I go outstation on shoots. Bebo’s son Taimur is a few months older than Roohi and Yash, and she and I have already started making plans for holidays together!”