Like the rest of the nation, Bollywood celebrities are too were glued to the television today as they gear up to cheer for India against Pakistan in ICC Champions Trophy finals. Indian fans are all set for the promising Sunday with action –filled cricket match between arch-rivals India Vs Pakistan. However, what has caught our eyes is Pakistani actor Ali Zafar’s video in support of his country.

Ali Zafar shared the video that sees him along with friends wishing Pakistani team all the best for the match against India. He captioned the video as, “All the best team Pakistan from team #teefaintrouble”

All the best team Pakistan from team #teefaintrouble

Well, we all know Indian Motion Picture Producers’ Association has banned Pakistani actors, singers, and technicians from working on Indian films and we think that’s the best decision ever. Dear Ali Zafar, there is nothing wrong in promoting your country but make sure that you don’t use India for your lavish living and work.

Dear Ali Zafar, you have rubbed Indians in a wrong way. Now suffer! Watch the video below and also check out how Indians have taught him a right lesson: 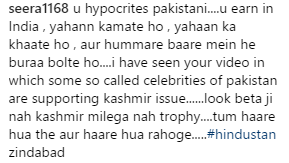 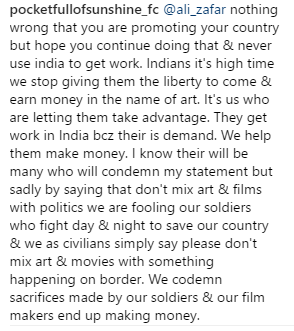