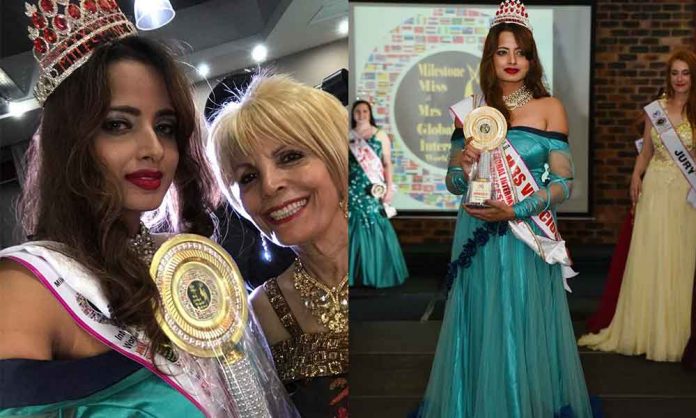 India’s Tejaswini Singh has become the world champion by winning the title of Misses Global International World -2018 – Prince of South Africa in South Africa, Johannesburg. In this difficult contest lasted for five days, Tejaswini achieved the highest point in every phase.

In the trade culture round, in the Tejaswini’s clothes, Radha-Krishna’s meeting was seen together, the same Indian dagger has the special art of every state of the whole country. Along with this, Tejaswini also got the “Most Vivishish” Kasbatytil seeing the best performance in her talent.

As the Screen India’s name became the main winner, all the slogans of India-India started, and the honor was also honored as the national anthem of India at the conclusion of the competition. Tejaswini will be given a grand reception when she comes to Mumbai airport after this glorious victory. According to Tejaswini she has a dream to pursue this success in pursuit of years of hard work and in the unlikely circumstances of mother Nirmala Singh’s daughters.

Tejaswini is the daughter of late Ram Singh of village Gram Khemdehi of Deoria district. Tejaswini herself is the manufacturer of this established herbal product company “Organic Greens”. And there is also a successful journalist and writer. After this spectacular victory, Tejaswini rescues her full time from the treatment of cancer and other serious illnesses and the adverse effects of chemotherapy.