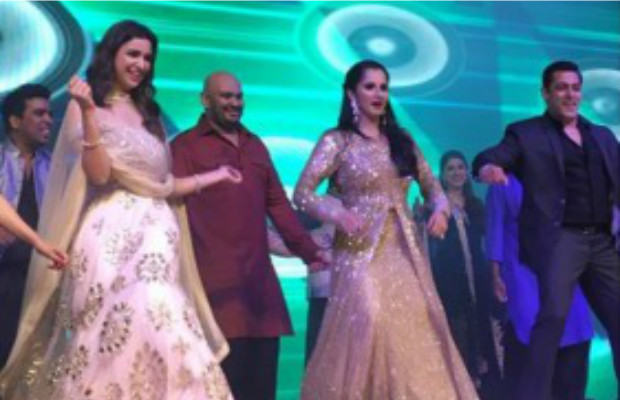 Tennis superstar Sania Mirza‘s sister Anam Mirza‘s pre-wedding event was a star-studded affair in presence of Salman Khan, Farah Khan, Parineeti Chopra, Arjun Kapoor and others. While the wedding is all set to take place in Hyderabad at Falaknuma Palace, Sangeet night took place recently. It’s known to all Salman Khan and Sania Mirza share a good bond and so, the actor did not miss to attend the wedding ceremonies. In fact, earlier this year, Salman Khan also launched Sania’s autobiography.

Making the sangeet night grand, Salman Khan also shook a leg with Parineeti Chopra and Sania Mirza, leaving audience mesmerized. Take a look at some of the inside and fun pictures of stars from Mirza‘s sister Anam Mirza‘s sangeet ceremony.

Sania’s sister Anam got engaged to her beau Akbar last year in September after he proposed her at the historic Falaknuma Palace. The wedding will take place at the same venue.