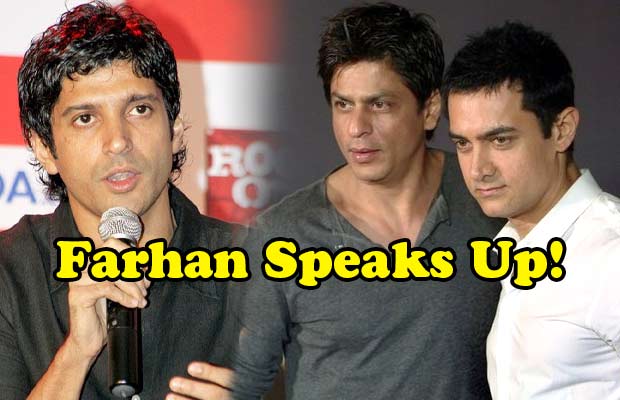 After loads of opinions and debates on the intolerance row, actor Farhan Akhtar has now come in support of Shah Rukh Khan and Aamir Khan. Shah Rukh Khan sparked up a never ending debate when he commented that India is an intolerant country, the superstar landed in a deep trouble when political entities also criticized him for the stance. Further, perfectionist Aamir Khan also followed the suite when he said that there is growing disquiet in the country.

The two superstars Shah Rukh and Aamir received loads of flak for sharing their controversial views on a public platform. The actors also were blamed for being anti-nationalists. Not only did the political figures criticize them for their statements, also many Bollywood actors showered them with criticism.

Well, multi-talented actor Farhan Akhtar has now spoken up in support of Shah Rukh Khan and Aamir Khan. Farhan Akhtar who has always been vocal about his views and is confident in speaking his heart out has opined, “You have people voicing a certain opinion, if you think they are wrong you can correct them, but there is a manner in which you do it, with a certain degree of respect. You cannot question the intention or (attribute) motive of conspiracy behind someone’s thought process all the time.”

The Wazir actor Farhan Akhtar further commented, “I feel that is bit harsh on people, who have the right to speak their minds. You have to engage with them and find out why they are saying it. If they are wrong, you can correct them but in a way that is dignified for everyone.”

While giving his utmost frank opinions, Farhan Akhtar also added, “We all are very concerned when the Parliament doesn’t function for the entire session because of the discourse being brought down due to a brawl…people walk out and nobody wants to engage with each other. I feel that is not the way progress can be made.”

Farhan Akhtar on the work front is looking forward for the release of his upcoming film ‘Wazir’. The film is an intense one with a thriller filled story. ‘Wazir’ also stars Amitabh Bachchan and Aditi Rao Hydari in lead roles. The film is expected to hit the theatres on January 8th, 2016.