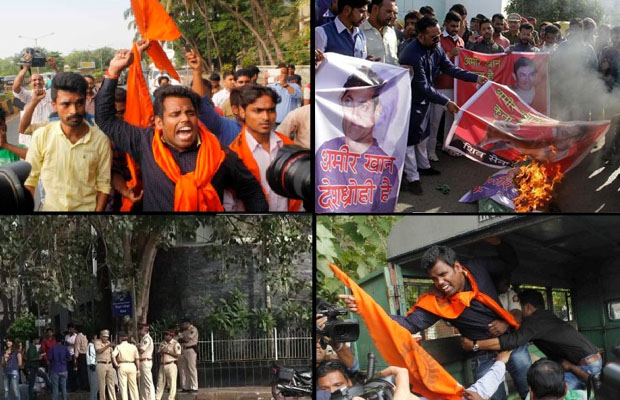 [tps_footer]Well, seems like the intolerance comment made by Aamir Khan is going to see no end. After the outrage over the same, there is another blow to Aamir’s comment. It is much known that political organization Shiv Sena in the mark of a protest has announced to pay Rs 1 lakh to anyone who slaps Aamir Khan. The party has not stopped at just that. Reports suggest that the party has also booked tickets to Pakistan for Aamir and wife Kiran Rao.

Aamir landed in a great controversy when he commented that there is growing disquiet in the nation. The actor went on to add that his wife Kiran Rao suggested that they leave the country as she is scared for the children. With the said statement Aamir also was being termed as an anti-nationalist. Started by Shah Rukh Khan, the intolerance row has been the talk of the town lately. After the criticism that followed, Aamir Khan also gave out an open lengthy explanation for the same saying that he stands by what he said and that he and wife Kiran do not intend to leave the country.

It is also being said that Aamir’s statement is misinterpreted by many. After the comment, various political entities gave their views on the matter. Just yesterday Mulayam Singh Yadav’s daughter in law Aparna suggested that Aamir failed to instill patriotic values in his wife.

The perfectionist of the tinsel town who is also the face of Incredible India and many such initiatives received flak for his irresponsible comment. The actor is credited for being the one who chooses logical films which are patriotic too. Well, after the comment seems like Aamir Khan ’s identity is lost. With Shiv Sena booking Pakistan tickets for Aamir Khan, we wonder where this intolerance debate is going to!